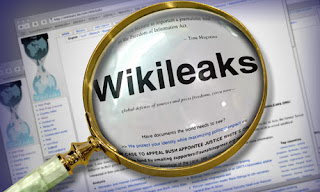 In case you missed it earlier this week, news came out that Wikileaks published their entire US State Department cable database.
As people pour through the massive data dump, the first nuggets (excuse the pun) of information are starting to surface.
And a gem of information has been uncovered in this US Embassy cable. Here is what the US Embassy in China had to say:
China is ecstatic that the price of Gold is being suppressed by the Americans.  They fully intend to take advantage of it.  As they note, "suppressing the price of gold is very beneficial for the U.S. in maintaining the U.S. dollar's role as the international reserve currency."
China has every intent to grow their reserves at these fire sale prices. And if things play out in the direction they are currently heading, $1900/oz will be considered cheap.
Zero Hedge commented on this today as well and they make the connection that anyone with any foresight can see for themselves. To wit: "What happens when "mutual and pension funds finally comprehend they are massively underinvested in the one asset which China is without a trace of doubt massively accumulating behind the scenes?"
The result will be nothing short of a worldwide scramble, not so much for paper, but every last ounce of physical gold.
As we have said before, we do not believe a return to the Gold Standard will be a good thing or that it will happen with full gold backed currency.
What WILL  happen is a worldwide rush into Gold and Silver, which will catapult prices parabolically upward.
Casey Research did an excellent paper back in March 2011 titled, "The Driver for Gold You're Not Watching".
It's well worth you time to check it out.
==================

Please read disclaimer at bottom of blog.
Posted by Whisperer at 3:21 PM