Thur Post #2: Is China nearing the tipping point? And whither Vancouver? 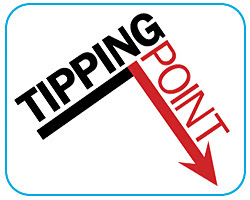 We have covered the flip floping of local Real Estate industry representatives who now claim 'hot asian money' is not the factor in the Vancouver Real Estate market that it has been made out to be.
Whether or not it is true, there is no denying a definite Asian influence that has transformed Vancouver since the early 1990s.
Asian money is most certainly present in Vancouver and it plays a role in our resilient housing bubble.
Some observers of our Real Estate scene believe the real tipping point for the implosion of our massive bubble will begin in earnest when the China juggernaut begins to slip.
China is renown for its boom/bust cycles and many critics content the latest 'China miracle' is simply an extension of that trend.
China, on a per capita basis, has pumped more stimulus into their economy than America has during this financial crisis. Their housing bubble is believed to be larger than the one the that built up in the United States.
Mike Shedlock, author of the blog Mish's Global Economic Trend Analysis has done a number of posts about the China situation.  You can see them by following the links at the bottom of this post in which he looks at news that China's shadow loan market is crashing and that scores of business owners, unable to pay back their loans, have disappeared or have committed suicide.
The collapse of the shadow loan market (and the rash of suicides) is the latest in a series of troublesome news out of China.

Back on April 17, 2011 we noted how the fourth ncrease in China's banking reserve requirements this year had triggered a plunge in Chinese real estate:
The China situation deserves close scrutiny.

If the China Real Estate bubble is indeed starting to unwind, at some point wealthy Asian property owners will be forced to liquidate assets they own in other parts of the world in order to cover debt payments.
And given the current situation in the Vancouver market, an emergency selloff in the high end of our market could be the trigger that starts a cascade of selling.
As we have said, it's a situation that continue to watch with interest.
==================

Please read disclaimer at bottom of blog.
Posted by Whisperer at 2:35 PM