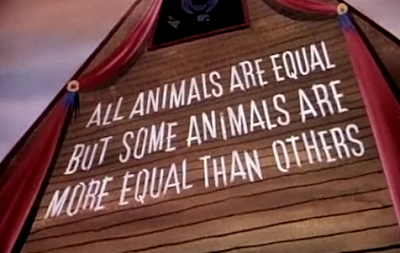 If you are remotely interested in the Canadian Real Estate bubble then you are well aware of CMHC or the Canadian Mortgage and Housing Corporation.

Founded after World War II to provide housing for returning soldiers, CMHC's role has grown dramatically in the last 65 years.  A Crown corporation owned by the Government of Canada, it's main function today is  providing insurance for residential mortgage loans to Canadian home buyers.

This insurance isn't for the Canadian who buys a home, rather it protects mortgage lenders against mortgage defaults by home buyers on mortgages of less than 20% down.

And after the dot com crash and the 2001 terrorist attacks, this insurance has had a profound effect on the Canadian economy.

Following the lead of Republicans in the US, the past decade has been one of pumping the Ownership Society for the Canadian Government. Gifts, incentives and inducements have been showered on home buyers and the result was demand swelled, prices popped and a bubble was born.

In Canada it was our own Conservative Prime Minister, Stephen Harper. The Conservatives gave us the zero down, forty year mortgage. They allowed Canadians to raid RRSP's for down payments. They created the Home Reno Tax Credit. They gave us the first-time buyer's closing cost gift and they instituted the infamous 'emergency interest rate'.

Harper's Conservatives have given us more pro-real estate initiatives in the last five years than Canadians have seen in the last quarter-century.

As stated numerous times before on this blog, the only reason our real estate market hasn't tanked like it has in the United States is because of the way our government intervened in the financial and real estate crisis.

The Conservatives created an economic boom in the 2000's around real estate and then bet heavily that if they could shield that boom from the 2008 financial crisis, the economy would start to recover and the bubble would weather the financial storm.

The problem, as you know, is that four years into the Great Financial Crisis of 2008 it is becoming crystal clear that this is a once in a multi-generational storm. Unlike an average recession, this crisis is persisting longer than anyone anticipated.

Both the Governor of the Bank of Canada (Mark Carney) and our federal finance minister (Jim Flaherty) have recognized this.

For over a year now Carney has issued warning after warning about high levels of household debt, especially mortgage debt. And Flaherty is desperately trying to engineer a soft landing from the real estate bubble by changing mortgage qualifying regulations and altering the parameters of CHMC insurance.

Those changes included reducing the maximum amortization period for loans qualifying for CMHC insurance first to 35 years from 40, then to 30 years from 35 years; lowering the maximum amount that Canadians can borrow to refinance their mortgages to 85% from 90% of the value of their homes; and withdrawing CMHC insurance from non-amortizing home equity lines of credit.

The fallout from those changes are now starting to make news.

In an article on Monday the Financial Post asks, Did CMHC promote risky borrowing?

Sales of the CMHC’s mortgage insurance fell by 10% immediately after the changes were introduced, though they have regained some ground since then.

But Finn Poschmann, vice president of research at the C.D. Howe Institute, is skeptical. “The size of the drop in refinancing is surprising to the point of shocking. You could hardly have better evidence of the extent to which CMHC practices have been supporting high debt and risky borrowing by homeowners.”

Charges of this kind are nothing new. And you can rest assured that scrutiny of this kind will make the Conservative Government very uncomfortable.

Faithful readers will recall a series of excellent articles put out by Murray Dobbin. Dobbin's 2009 article titled 'Why Canada's Housing Bubble Will Burst' garnered significant interest in the blogosphere when he stated:
Shortly after this article was written, this blog contacted Dobbin and asked him about the source for this comment.

Dobbin stated he got the reference about the Conservative Government directing CMHC to approve as many high-risk borrowers as possible from a CMHC report which was freely available on the CMHC website.

Your dutiful scribes from this blog checked out the document and read it personally.  Unfortunately we did not download a copy (and if anyone out there did, we would love to know). Dobbin's statement was confirmed, CMHC stated in that document that they had been directed by the government to approve as many high-risk borrowers as possible.

A few months later, when a curious reader asked us about the source for this quote, we went to the CMHC site to forward the link to the report.  It was then we noticed the report had been removed.

When we asked Dobbin about it, he also noted (with surprise) that the report was gone from the CMHC website.  Dobbin also had failed to download a copy.

Dobbin obviously struck a nerve and CMHC were directed to remove the document.

Dobbin's reference has been used extensively around the blogosphere. The great social experiment, Wiki, even incorporated Dobbin's information into it's database about the CMHC.

Don't bother to look for it now, tho. Curiously, when we went to reference the site for the Financial Post article mentioned above, we noticed that the Wiki CMHC page had undergone a significant sanitization.

Screen shots from 'the full wiki' CMHC page are below (click to enlarge). And it anyone has a copy of the original CMHC report, send it along. It would be great to add it to the document paper trail:

Much like the inhabitants of Orwell's Animal Farm, we are left to look at what is now written on the wall and scratch our heads trying to remember what may have been changed.

Fortunately for us, the Internet never forgets. 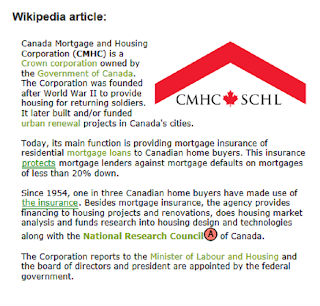 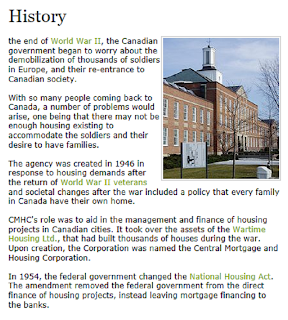 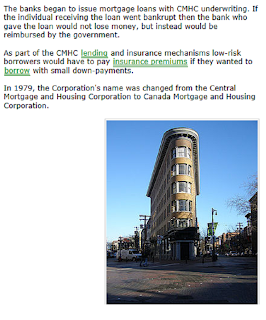 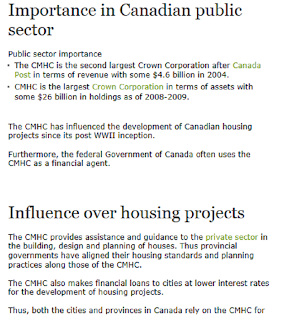 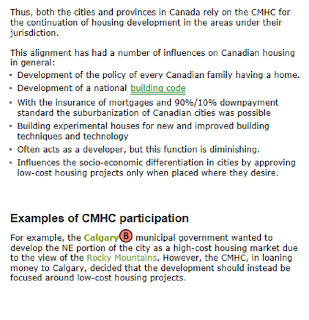 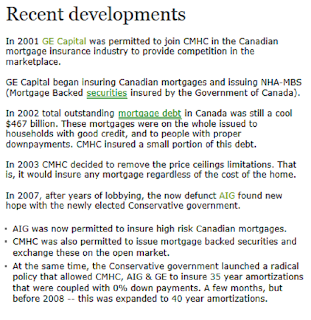 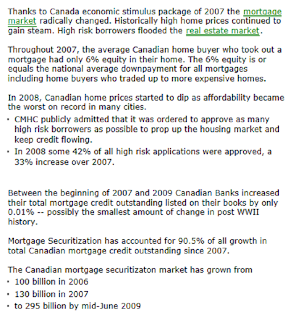 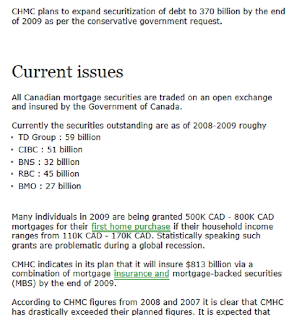 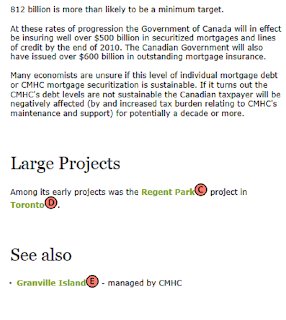