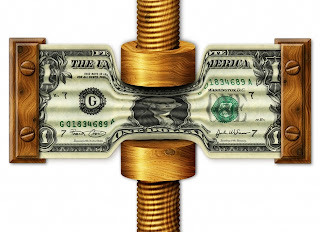 Faithful readers who follow this blog know that we extol the virtues and opportunities of Silver.
The metal has been call 'The Opportunity of the Decade' by the likes of Eric Sprott of Sprott Asset Management.
But at the same time many of you have found Silver to be extraordinarily frustrating.
The precious metals are highly manipulated by the banking cartel's who are in line with the US Federal Reserve policy of market intervention to support the US Dollar.
And when it comes to Silver, the banking cartel is almost singlehandedly represented by JP Morgan which holds the largest short position in any commodity in the history of commodities trading.
In 2010, as summer wound down, we were very excited about the prospects for Silver.  It appeared conditions were lining up for a giant short squeeze which would force short covering by JP Morgan. The end result would be a significant increase in the price as this squeeze occurred.
Here is how the Silver spot price played out from August 2010 to April 2011.
In August 2010, Silver was sitting at just over $18 per ounce and jumped up to $19.00 (click on all images to enlarge).

Since then Silver has been beaten down and hovers in the $40.00 range.
You don't see much coverage of this short squeeze in the press. Most mainstream pundits and reporters have assumed that it was speculative buying that caused Silver's huge rise from $18.00 to $49.75.

There is no doubt that a lot of speculative money was starting to enter the fray towards the end of the winter run.

However, in futures markets, huge moves like we say from August 2010 - April 2011 are often the result of short squeezes.

And have no doubt, this is exactly what happened in Silver.
sentimentrader.com is a great resource and produced the following chart. It is produced from data compiled from the Commitment of Traders Report.  The chart shows both the Silver open interest and the speculative long position had been trending down prior to August 2010 and outlines for us exactly why Silver spiked in price. 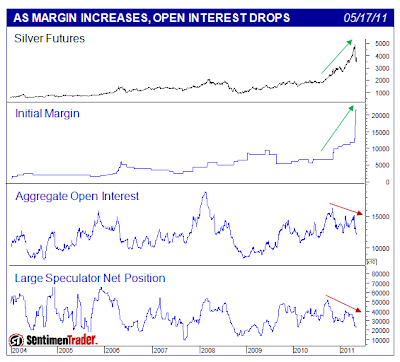 Both Silver's open interest and the speculative long position continued to decline during the massive price move from $18.00 - $49.75.
When open interest falls but price rises, its a short squeeze.

The same thing happened with Cotton just a few months earlier and the Commitment of Traders Report tells us that the commercial traders (which includes JP Morgan) were covering their shorts massively.
How much did they cover?

Back in August 2010 the size of that naked short position was 25,412 contracts.
Remember, each contract representing 5,000 ounces of Silver. That means JP Morgan held paper promises they had sold for over 127 million ounces of Silver (127,060,000).
And during the short squeeze JP Morgan likely covered 24 million ounces of their naked short silver position at a massive loss.
This is why Silver rose so dramatically in value.
It wasn't because Silver was in a bubble. It wasn't because of irrational speculation by average investors. It was JP Morgan covering their naked short silver position at a massive loss.
That's why this blog was so excited and focused on the short squeeze in Silver that analysts were expecting in the fall of 2010.
So what's happened since then?
Well... in May we saw the famous 'take-down' of Silverr.  Five margin hikes on traders in 8 days forced massive liquidation by investors trading on credit.  This was combined with massive short selling once again by JP Morgan.
Silver plunged from $49.75 to to $33.00 then recovered to hover around the $40.00 mark.

The September CFTC Bank Participation report indicates that four large US banks increased their silver shorts by 809 contracts in August from 23,775 to 24,584.
This is an increase of 4.05 Million ounces to the manipulative short position in silver in a single month. More importantly the total naked short position is up to 24,584 contracts.


Grasp what has happened here.


JP Morgan has been rebuilding their silver short position almost entirely back to the 25,412 contract position held prior to the massive short squeeze in August 2010.

Worldwide demand for Silver and Gold during the latest phase of the Sovereign debt crisis is going berserk. Rather dampen demand and drive investors away from the metal because it is too volatile, buyers continue to accumulate Silver.
The banking cartel is desperately flooding the paper market with paper promises of Silver and Gold in a frantic attempt to keep a lid on the prices of both Silver and Gold.
And as panic slowly grips Europe in the unfolding debt quagmire, demand is increasing even more.

Another short squeeze is looming on the horizon... with a corresponding huge jump in the price of Silver.