Will this fall trigger another short squeeze on Silver? 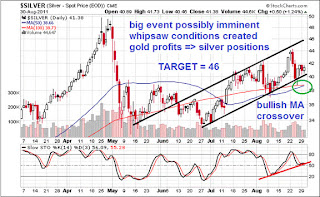 To those who follow Silver, anticipation is rising that this fall could see another big spike in the value of the metal as several important factors come together.
Silver's open interest on the COMEX continues to contract. 112,000 is considered rock bottom and the current OI is below that at 111,735. With an OI nearing 110,000, the risk of a major raid or dip in silver is considered extremely low. Analyst's believe this is because the banking cartel is loathe to provide any paper shorts with the high demand currently being shown.
Then there is the intensifying expectation of QE3, a factor sure to drive even more investment into both Silver and Gold.
For the chartists, the demand for Silver is setting up very bullishly.

Silver's 50 day moving average is crossing over its 100 day moving average, an extremely strong sign. The last time silver's 50DMA cleared its 100DMA was back in September of 2010 (when silver was trading near $23/oz).
The crossover of moving averages has some speculating that Silver could power past $50 early this fall. Then we could see it rapidly run up to $70-$75 once the all-time nominal high is convincingly taken out -  much the same as silver shot from $22 to $50 once the bull market high of $21.35 was taken out in Sept 2010.
Faithful readers will recall that when Silver shot from $18 to almost $50 in late 2010/early 2011, the surge was propelled by a short squeeze on Silver.
While the squeeze was occuring, the Silver community was divided as to the legitimacy of a group of ex-JP Morgan traders fired by Blythe Masters in July of 2010 who were supposedly leading the short squeeze charge.
Known as the 'Wynter Benton group', they were alleged to have been looking to wreck havoc on JPM using their own naked silver shorts.
Messages they posted through the yahoo chat boards proved to be very accurate about the squeeze occuring in the Silver community.
Recently the group has been active with postings again. We recently profiled their claims that China may soon announce that the middle kingdom is going to add Silver as a reserve asset along with Gold.
The group is also suggesting another coordinated squeeze is on the horizon. Looking at the latest Commitment of Trader's Report we see that JP Morgan covered a massive 4,288 contracts from their short side at higher and higher prices last week. One wonders about the size of the losses they are experiencing.