Our housing bubble "bound to burst" 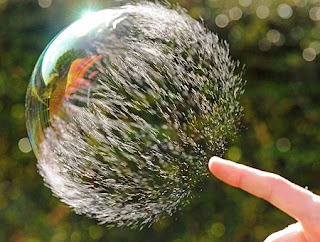 One of the greatest complaints in the local blogosphere is that our mainstream media seems so beholden to the Real Estate industry because of the tremendous revenue stream they deliver via advertising.
That's why an article on Friday in the Vancouver daily newspaper, The Province, is such a pleasant surprise.
Saying what the blogosphere has known now for several years, The Province headlined "Housing Bubble Bound to Burst: When it does, the result isn't going to be pretty, economist says"
Now the economist making this prediction is David Madani of Capital Economics.  We have profiled Madani before and these statements are consistent with comments made earlier this year.
What is so surprising is to see one of Vancouver's two main daily newspapers headlining the news is such dramatic fashion.
The article notes what I believe will become a crucial point in the coming years when the collapse is well underway:
The Government is aware.  We have seen that in the comments of both Bank of Canada Governor Mark Carney and Finance Minister Jim Flaherty.
Benjamin Tal, senior economist at CIBC World Markets says what is becoming the accepted wisdom on our current housing bubble:
The faith in low interest rates is tied to the worsening economic climate and level of sovereign debt. For 20 years now we have enjoyed artificially low interest rates to support the economy.
Faith in this going forward is folly but not as much folly as what Tal the Province article closed with:
We have covered the folly of this extensively.  CMHC has enabled the lending through our banks and there most certainly sub prime borrowers out there... and in numbers that we believe will be proven to be far greater than in America.
So while it is pleasing to see the media cover the fact that this bubble will burst, it is disappointing to see the primary cause of the collapse continue to be justified.

Please read disclaimer at bottom of blog.
Posted by Whisperer at 8:01 AM