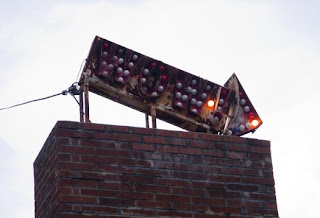 The big news today is rampant rumours of an impending Greek default and it has some speculating that the big day may come as soon as September 20th.
The thinking is that Greece has two big bonds with coupon payments due that day totalling 769 Million Euro. So if the IMF wanted to avoid letting another billion euro go down the drain, September 20th would be a good day to do it.
Then there is the US Federal Reserve.
The Fed has their rare 2 day FOMC meeting starting on September 20th.
Maybe the fact these two events fall on the same day is a coincidence, but what better way to be prepared for new emergency policies than to have to act on a Greek default?
Speaking of FED rumours, financial analyst David Rosenberg has been speculating that the outcome of the FOMC meeting could produce stimulus far greater than what anyone is expecting.  "If Bernanke wants to juice the stock market, then he must do something to surprise the market. 'Operation Twist' is already baked in, which means he has to do that and a lot more to generate the positive surprise he clearly desires."
All of this is clearly spooking China.
As Ambrose Evans-Pritchard notes in The Telegraph, a key rate setter for China's central bank let slip that Beijing aims to run down its portfolio of US debt as soon as safely possible.
"We would like to buy stakes in Boeing, Intel, and Apple, and maybe we should invest in these types of companies in a proactive way. Once the US Treasury market stabilizes we can liquidate more of our holdings of Treasuries," he said.
This appears to be the  first time that a top adviser to China's central bank has uttered the word "liquidate" in relation to US Treasuries. Until now the policy has been to diversify slowly by investing the fresh $200bn accumulated each quarter into other currencies and assets – chiefly AAA euro debt from Germany, France.
And what size of a 'liquidation' are we talking about?
It is estimated that over $2.2 trillion US Dollars is held by SAFE (State Administration of Foreign Exchange), the bank's FX arm.
Finally, the last tidbit in the rumour mill for today focuses on the infamous JP Morgan.
As we posted yesterday, a detailed class-action lawsuit has been publicly released on the silver price manipulation activities by JPM. The suit outlines exactly how JP Morgan has been conducting it's manipulation including specific names and titles of those JPM employees involved.
But the rumours focus, not on the Silver manipulation lawsuit, but on JPM's outstanding derivative position.
As faithful readers probably already know, JP Morgan is sitting on a $80 trillion plus derivatives monster.
Derivatives are securities whose value depends on the values of other basic underlying securities. Derivatives have exploded in use over the past two decades. They include such well known instruments as futures and options which are actively traded on numerous exchanges and as well numerous over-the-counter instruments such as interest rate swaps, forward contracts in foreign exchange and interest rates, and various commodity and equity derivatives.
And as noted at the end of this 2009 Business Week article, JP Morgan has the face-value equivalent of a mind-boggling $87 trillion in derivatives on its books.
Although your dutiful scribe cannot confirm it with a credible citation, the chatter is that if the price of Silver remains above $36 per ounce by mid/late October, the first of JPM's derivative bombs will denonate in their faces.
October always seems to be a volitle month in the world of global finance.
But if even only one of these stories plays itself out, October 2011 could be an epic month for the ages.
---------------------------------------------------------
Update
---------------------------------------------------------
Former U.K. Prime Minister Gordon Brown is speaking at the World Economic Forum in the Chinese port city of Dalian today and his candor is nothing short of astounding.
That, in a nutshell, says it all.
But Brown went on and noted that while the ECB is part of the short-term solution, it needs additional assistance. The European Financial Stabilization Mechanism, which is run by the European Union’s 27-nation executive arm, is “not enough.”. “Substantially more resources” are required.
A debt problem cannot be resolved with the creation of more debt, which is what authorities have been trying to do.
Do you think you will ever hear such candor from the likes of US Federal Reserve Chairman Ben Bernnake?

Please read disclaimer at bottom of blog.
Posted by Whisperer at 2:57 PM