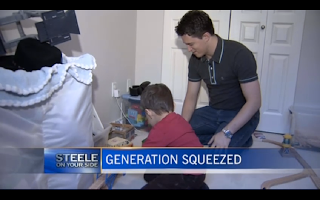 Interesting housing story over on CTV.  You can click here to see the clip.
The segment is titled 'Generation Squeezed' and it profiles a young family who question whether they will ever be able to own a home in Vancouver.
28 year old Derek Atkinson is interviewed. 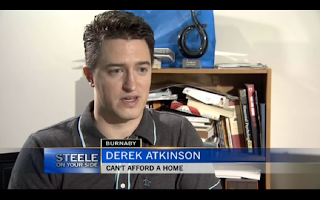 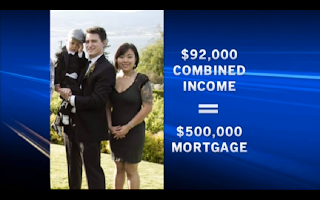 The problem is, saving up $25,000 will take as much as six years... and that's a stumbling block.
But the Atkinsons are privileged. CTV tells us the average family only makes $67,000 per year, enough to qualify for just a $300,000 mortgage... and in Vancouver $300,000  doesn't go very far.
It prompts CTV to ask, "do young Vancouver couples have a right to home ownership in the City they grew up in?"
Which brings us to Tom Davidoff from the UBC Sauder School of Business. 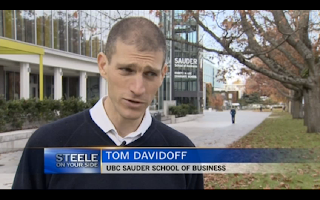 CTV then drops another great stat. Average household incomes are no higher today than they were in the 1970s. And with those stalled incomes they need to pay for those housing prices which have gone up 76% across the country and almost 150% right here in BC.
CTV concludes that it all adds up to a growing sense of frustration and hopelessness for an entire generation of Canadians like the Atkinson's.
The story closes as Atkinson says;

Please read disclaimer at bottom of blog.
Posted by Whisperer at 11:30 PM