Outspoken realtor censured for critical comments about his industry 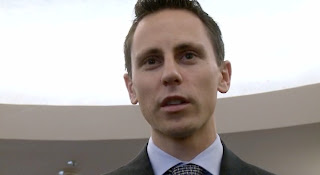 A week and a half ago we told you about Keith Roy, a realtor with Macdonald Realty.
He was the westside realtor who was telling clients it's time to cash out of the real estate market in Vancouver before prices decline significantly.
Last Friday the local and national news picked up on his story.  In this post we relayed how the Financial Post newspaper had picked up on his warnings.
His story was significant, not only for the message he was conveying... but also because of the harsh criticism he had for his industry.
Now let's not build Roy up into something he's not.  Far from being a sage realtor looking out for the welfare of homeowners (or one who is looking out for up and coming young buyers), Roy is an opportunist.
Nothing conveyed this more than a 2009 National Film Board documentary.
Shot as part of a series on the economy, the NFB produced three episodes about Roy which clearly cast the then 27-year-old for what he is: a narcissistic opportunist.
In one episode he helps his lawyer flip a condo for a $100,000 profit, and openly admits he uses gifts to bribe clients.
He also describes his dreams & strategies and tells us what it takes to muscle in as a RE ‘professional’. Tidbits such as dressing for ‘gravitas’, becoming a celebrity, poaching assistants, ‘taking it up a notch’ and quick profits are all part of the formula he espoused.
So it wasn't exactly a surprise to see him attempt to leverage all the recent mainstream media articles about a pending housing crash to his benefit.
Let's face it... the ultimate end result of his most recent media foray was to capitalize on the negative housing situation. As he said on his blog:

If the media picks up on this story, you can be sure the rest of the market will follow the west side. If you are on fence about selling your home, thinking of cashing out, nearing retirement or need your equity to buy your next home, now might be the right time to call.

And since he promptly went to every media outlet with his opinion's about imminent doom, there was little doubt the media would pick up on 'this story'.
More significant was the manner in which Roy cast the current situation.
He didn't just capture the doom-ish characteristics of the market... he out-and-out threw his industry under the bus. Roy wrote:

"Far too often the real estate industry, of which I am obviously a part, makes excuses for slow sales periods, declining prices and difficult negotiations. These excuses are self serving."

You gotta love the chutzpah.
He's bang on, of course.  And there's no doubt in any bear blogger's mind that if he hadn't drawn such intense media attention that the 'Industry' would have censured his opportunistic hiney in a way that would have made that blog post disappeared within the week.
As it is, he simply had to remove parts of his commentary.
The original blog post was recently amended and this caveat posted before the body of his commentary:

*This version has been edited because it was deemed by some of my colleagues to be disrespectful to the industry of which I am a part."

Disrespectful? Or brutally honest?
Perhaps both.
And whether you believe Roy is simply an opportunistic sales weanie or not... his comments were a refreshing bit of honesty from a member of an Industry which, in large part, Roy correctly describes as self-severing and "makes excuses for slow sales periods, declining prices and difficult negotiations."

Please read disclaimer at bottom of blog.
Posted by Whisperer at 11:26 AM