Tues Post #2: How crazy is real estate speculation in Vancouver?

You gotta love the chutzpah of a bubble market.
The video above is for 1490 Balfour Avenue, a mansion in the toney Shaughnessy neighbourhood of Vancouver.
It's 8 bedrooms, 5 bathrooms and 3 half bathrooms. A massive 9,414 square foot house on a 17,827 square foot lot.

The current assessed value of the property is $3.05 million.

So how crazy is the speculation in our market?

(Really? You're trying to flip a home for a $3 million profit?) 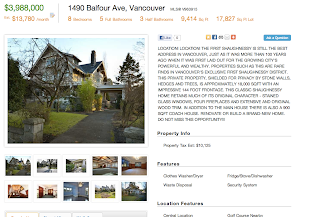 If it sells for that price, it still amounts to a $1million gross profit in one year. Clearly the buyer was hoping to take advantage of HAM (Hot Asian Money) and the evaporation of that market has cut the bottom out of this buyer's wild expectations.

You have to wonder if the property is marketed as '40% off'?

Please read disclaimer at bottom of blog.
Posted by Whisperer at 11:55 AM