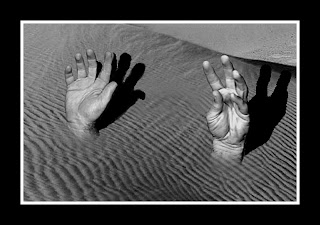 Long time readers of this site know that on numerous occasions we have talked about the Canadian Banking System and the myth of it's stability.

It was on December 7th, 2009 that we quoted a Sprott Asset Management report and discussed how the Canadian banks escaped the 2008 meltdown unscathed.

Few realize all five Canadian banks are levered at an average of 31:1 and that if tangible assets were to drop by 3% in value, tangible common equity would effectively be wiped out.

Nor do many realize that Canadian Banks were bailed out by receiving $65 billion in liquidity injections from the Insured Mortgage Purchase Program (IMPP) in 2008 - Canada's version of TARP - whereby the CMHC purchased insured mortgages from Canadian banks to provide additional liquidity on the asset side of their balance sheets.

No one seems to be aware that the Bank of Canada then gave our Canadian Banks an additional $45 billion in temporary liquidity facilities or that the Canada Pension Plan, through the purchase of $4 billion in mortgages prior to the IMPP program, raised the total government bailout to $114 billion.

Back in 2009 we talked about how we have been fed almost daily fed propaganda that tells us that the dramatic performance of our nation's real estate during this worldwide economic crisis is all a result of the solid foundation of our nation's banks and the virtuous conservatism of the Canadian financial system.

And that's it is... propoganda.

Earlier today on of the contributors to our first Monday post left a link to an article titled "Canada's Housing Bubble Blow out amid Global Collapse".

The article provides an interesting analysis of the recent downgrading of Canada's banks by Moody's and the reasons behind the downgrade.

The move by Moody's marks the first of what will, no doubt, become widespread worldwide realization that the stability of Canada's Banks is more myth than fact.

The article is a great read and while the blog doesn't agree with all of it, it does articulate many of the points we have attempted to make in the past.

While this shouldn’t come as much of a surprise, the long-standing myth, proclaimed by official talebearers, that the Canadian banking system is the most “stable system in the world” due to its “conservative banking culture”, has been seriously undermined. Moody’s Investors Services recently spooked the Canadian banking community when it announced in a June 25 [1] report that the emergency “corrections” being made to the overblown Canadian real estate bubble to deleverage itself from oblivion, has come too late.


In April of 2012, the Canadian Centre for Policy Alternatives (CCPA) issued a report called “Big Banks Big Secret” which demonstrated the sleight of hand $114 billion of bailouts of Canada’s five biggest “too big to fail” banks which had found themselves loaded with worthless assets from November 2008 until 2009 [2]. As the CCPA report documented, these bailouts were initiated by the Canadian government directly via the Canadian Mortgage and Housing Corporation (CMHC), which produced $67 billion to clear the books of private financial institutions of their toxic paper, followed up by the Federal Reserve’s 0% open discount window of 2011, which was tapped heavily by those same five banks who all the while maintained that they were in perfectly sound shape, and didn’t need any help yet took liquidity injections nonetheless. This Fed scheme, as well as a similar operation conducted by the Bank of Canada represented the remainder of the $114 billion bailout (figure 1).

Defenders of the bailout from all sides of the aisle in Canada, much like their American counterparts, will defend the scam by first calling it either a “liquidity injections” or “investment”, and then stating that they actually turned a profit after the initial capital was returned with interest! However, like in the United States, what tends to be avoided is the fact that those toxic assets covered by taxpayer revenue, represented magnitudes more than their nominal value due to infamous leveraging practices on the national and international derivatives scene. In the case of the USA, actual assets associated with those bailouts were in fact over $29 trillion [3]. This begs the question: how much fictitious speculative capital was actually represented by the underlying $114 billion?

Canadians have swallowed hook, line and sinker the story that ours is “the finest banking system in the world”. As a by-product of such a delusion, a great number of citizens have allowed themselves to get caught up in a gigantic real estate bubble where prices have doubled on average since 2002, although countless cases of quintupling or sextupling prices over the same interval exist (figure 2*). This bubble has resulted in average real estate values having surpassed even those of the United States at its peak as of June 2011 (see figure 3). When this is combined with the personal debt to GDP ratio of $1.50 to $1.00 as one of the highest of all Western countries, the image of Canada’s “conservative” financial culture no longer holds, and in its place, the dark shadow of a predatory banking system is expressed in the great northern dominion of the British Empire.

It now stands that total assets associated with securitized mortgages have stretched beyond $1.1 trillion dollars, and it is important to keep in mind that this is happening, not within a vacuum but within the context of the hyperinflationary meltdown of the trans-Atlantic monetary system.

What has kept this bubble growing?

In the immediate maelstrom now at hand, the chewing gum holding the hull of the Canadian financial system together is to be found in a few key factors, but not least among them is the ultra low interest rates being maintained by the Bank of Canada. These low interest rates of nearly 0% (figure 4) make borrowing cheap; attract international speculative agencies resulting in an ever stretched bubble. Insiders in the Canadian government have revealed to this author that during internal briefings, Mark Carney himself has pointed out that should even a small increase in interest rates occur, an immediate 10% default of houses across the board would follow resulting in a vacuum much greater than its $110 billion dollar nominal value.

These interest rates have been kept artificially low primarily as a function of the unprecedented taxpayer-backed insurance scheme provided by the Canadian Mortgage and Housing Corporation which was created in 1946 as a federal insurance agency modelled on the American Fannie Mae and Freddy Mac, but which under the current liberalized order, now behaves as a monster used only to prop up a dying system, evidenced by its astronomical insurance cap of $600 Billion dollars (a ceiling that had been increased several times by the Harper government in recent years from its $350 billion limit in 2007, and $50 billion in 1988 (see figure 5)). The other major mortgage insurer Genworth Canada, while remaining private, also has a cap of $250 billion, 90% of which would be covered by the Canadian government were it to go under.

To restate the formula: risky assets are guaranteed by the government on the condition that interest rates are kept nearly nil by the government such that exponential profits may occur as out of thin air. For this scheme to function, however, a highly centralized top down meshing of government and private finance must occur. As historian Tom Taylor wrote in 1976; “The political power of the larger banks and of the Bankers’ Association can hardly be exaggerated. The bank acts were written largely by the very banks supposedly regulated by them [4] .”

While it is important to understand the current chewing gum holding the ship of Canadian finance together, it is vital to keep one’s mind on the more important question “who designed the ship, and sailed it into the maelstrom?”

For this to be understood, it is necessary to look back a little farther into history and recognize the treacherous effects of the Mulroney governments’ destruction of three of the four pillars of banking in 1987. It is demonstrable that those speculative practices underlying the current bubble which Canadian financial cartels have been complicit in creating, both at home and internationally alike, could not have occurred were it not for the repeal of those laws which forced the separation of commercial banking, trusts (which were the sole issuers of mortgages), securities dealers, insurance companies and which had been maintained for decades following World War II, otherwise known as the “Four Pillars”. After the repeal of those pillars all of the above financial institutions could all mingle under one roof and waves of mergers of the already cartelized financial institutions during the 1990s resulted in a new type of beast which could take legitimate deposits and create the means of leveraging risky securitized debts (as well as other insured liabilities) as “universal banks”, much of which would be now backed by tax guarantees. To re-emphasize, mortgage related securities could not have existed had the Four Pillars not been repealed.

This was the Canadian experience of the same essential process which lead up to the repeal of the Glass-Steagall under the Gramm-Leach-Bliley Act in the United States in 1999 orchestrated by the City of London centred oligarchy around Lord Jacob Rothschild’s Inter-Alpha Group of banks.

Today, this system has inflated itself beyond all containable limits. The Canadian Council of Chief Executives has implemented a veritable coup over the past several decades for their London masters. The time has come to decide whether Canada will move with the LaRouche three-step program of a Glass-Steagall-like bank separation, the adoption of a public credit system and the North American Water and Power Alliance (NAWAPA) or abandon all remnants of national sovereignty as it follows the City’s crazed British financial empire faction into hell.