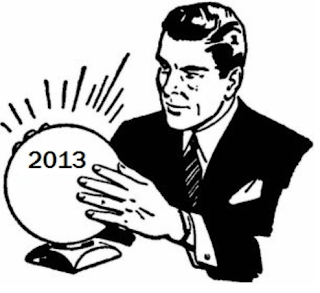 A couple of days ago we brought you a market analysis from Richmond realtor Arnold Shuchat MBA, LL.B., B.C.L.

Dubbed 'Alphabet Arnie' by our cadre of faithful readers, Shuchat had this take on the real estate market in Richmond for 2013:

The average observer may have had his head in the sand in Vancouver, but the market has already moved down some 25% depending upon the particular sector.


Being right in the middle of it, I detect a renewed vigor among buyers as of the end of November. Many listed properties in our market are owned by sellers who do not have to sell and skew the sales to active listing statistical ratio. I see prices holding firm and buyers coming back in. The effect of all this now, is that garbage will not sell as fast as it would have and properties will have to be better prepared for the sale.

Frankly, from the inside of this industry, I think MacLeans missed their call by about 8-11 months in the west coast market, and, short of producing additional fear into the market by their article, signals to me that additional opportunities can be reaped in the existing climate by betting against broad brush articles with incendiary pictures produced by newsmaking press.

As we mentioned in our previous post, Shuchat is a real estate agent who has been very proactive in advising clients about properties that have declined and where the market is going. His website blog posts have tracked the Richmond market very closely in this regard (and well worth checking on a regular basis if this information appeals to you).

So it is interesting that he appears to be calling a bottom to the market slide and the end to the collapse in prices.

Regulars to this blog know we have come to respect the view of another Richmond real estate agent and regularly profile his views.

And as luck would have it, James Wong is out with his January report and prognostications for the coming year.

Right off the bat, Wong zero's in on the huge number of listings that expired at the end of 2012:

But rather than join the chorus of R/E insiders who see this as a bullish piece of news, Wong focus on a disturbing counter-trend: sales.

The chart below showed a clear trend of declining sales as far back as 2005. The decline in sales could be attributed to high home prices getting out of reach by home buyers. A smaller pool of buyers sustained the housing market and home prices until sometime around mid 2011.


It was clear that the housing market in Greater Vancouver was in decline. With just around 25,000 homes sold during the year, 2012 was not much better than 2008 when a seizure of the financial markets around the world caused a major drop in home sales in Greater Vancouver. 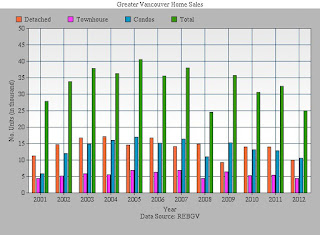 Although the trend-line projection for home sales in Greater Vancouver for 2013 is showing a sale level around 29,000 units. This will not likely to happen due to the fact that there are major forces affecting the market for 2013. Tightened lending standards and negative market sentiment will likely result in home buyers staying on the side-line for some time. The probability of home sales for 2013 staying at current level around 25,000 units cannot be ruled out.

So Wong thinks conditions are going to lead to another year of abysmal sales. Judging by what we have seen in the first week of January, he is correct so far.

So what will this bearish outlook mean for real estate prices in 2013? Will the slide be halted, as Shuchat suggests?

With weak sales and declining prices already in motion, further price decline is expected to continue. Home prices for condos have already declined and now hovering just above the 2007 price level. Some major news can be expected later this year on presale condo buyers not able or willing to complete their purchases.

The decline in home prices will likely to continue as the real estate down cycle is in motion. The market rally in home prices from 2001 to 2007 was extended due to massive cash injection by the Governments in early 2009. The current Government credit policy to engineer a soft landing is working to reverse the run-away and over-speculative housing market. If the complete cycle takes 6 to 7 years to play out, we could be in for another few years of price decline and low sale level.


Home prices are dictated by buyers, and in a buyer market price decline will continue until a large enough number of buyers are available to absorb the excess supply. A good indicator to watch is the supply/demand ratio or the MOI (months of inventory). When there are less buying interest and a high level of supply, home prices will continue to decline, until confidence returns to the market. We could be facing a 10% or more decline for the next 18 months.

So rather than holding firm Wong see's market prices dropping at least another 10%, if not more.

Add that 10% plus drop to the 25% that Shuchat says the market has already endured and you have quite the drop in the cards for Richmond.

It makes for an interesting contrast from two players who are "inside the industry".

We will check back later in the year to see which one is reading the tea leaves correctly.


Please read disclaimer at bottom of blog.
Posted by Whisperer at 7:20 AM