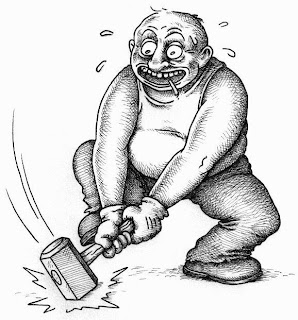 As events play out in Gold and Silver, the predictablity of what is occuring is almost comical.
With options expiring this week and Ben Bernanke giving the Federal Reserve's highly anticipated FOMC statements Friday from Jackson Hole, EVERYONE was expecting classic cartel action on both Silver and Gold in the days leading up to Thursday/Friday... and we were not disappointed.
Those who follow the metals have been wondering how long before the same sort of attacks on margins in Gold that Silver saw in May (when margins were hiked 5 times in 8 days to force a selloff).  Even on CNBC last week, Jim Cramer was touting the prospect of margin hikes.
Two weeks ago the CME hiked gold margins by 22%.
Two days ago the Shanghai Gold Exchange jacked their margins by 26%.
This morning Gold plunged by $100/oz, the most since December 2008. Some rationalized that the market was about 24 hours late in processing the news from the Shanghai Gold Exchange hiked gold margins, but in reality the selloff was insiders getting a jump on the next attack.
And that attack is now public after having been widely leaked this morning: the CME has boosted margins in Gold by an additional 27%.
Look for margins to ultimately be raised to 100% cash before things are done. This fast, deep correction is one of the signposts on the way to much, much higher prices for both Gold and Silver.

More importantly look for the blatant and heavy handed bear raids in the metals, although very much anticipated and a source of some profits, to continue.

Remember... nothing has changed in the fundamentals driving both Gold and Silver.

There has never been a time in history when debt problems globally have been this monstrous.  Harry Schultz, the retired but highly respected investor, summed up the calamity we face in his last market newsletter at the start of the year.  He said,  “Roughly speaking, the mess we are in is the worst since 17th century financial collapse. Comparisons with the 1930’s are ludicrous. We’ve gone far beyond that. And, alas, the courage & political will to recognize the mess & act wisely to reverse gears, is absent in U.S. leadership, where the problems were hatched & where the rot is by far the deepest.”
==================

Please read disclaimer at bottom of blog.
Posted by Whisperer at 2:18 PM