Cameron McNeill: "I don’t know if it was an overzealous employee or if this happened in a formalized way.”

First off we start with an update on yesterday's post.

In answer to one of our questions, I was advised by CBC reporter Matthew Black that MAC Marketing Solutions sales director Melanie Briggs wasn't on scene at the Maddox display suite when the CBC-TV crew was there.


I was told that "Melanie from MAC" would be there last Saturday. But, if she was, I certainly didn't meet or see her. Nic Jensen - who appears on camera in the original story - was the principal MAC person on hand for both myself and Ms Paterson.

Thanks for clarifying that, Matthew.

So now we have answers to 2 questions from yesterday.
But the questions about what happened at the Maddox display suite have only begun.

Let's take a closer look at what we have been told about what happened on February 9th, 2013.

In exposing the fraud that was perpetrated by MAC Marketing Solutions that day, here is what the TV stations told us in their broadcasts.

From the CTV version

They checked out the scale model, they toured the show suite. On Saturday these two young women seemed keen on buying at a downtown high rise called Maddox.

So we put them in our story on real estate and Chinese New Year.

From the CBC version

Kirk Williams: Things aren't all they seem at this condo presentation centre.


Take a look at the women taking a tour, marvelling at all the features.


Potential buyers hoping to make a lucky start to the lunar new year by buying a condo?


Matthew Black was the reporter on the story.  He asked marketing staff for help in finding Chinese buyers.


One couple didn't want to do interviews. Initially the two women were shy too.


Matthew Black: A few minutes later that story changed again and this time they were going on camera. And this is how we met Chris and Amanda.

So what we have is that CBC and CTV are invited to come by and do a story on real estate and Chinese New Year.

They show up at the Maddox sales presentation centre, and the display suite is full of potential buyers. It's positively teaming with couples who are doing EXACTLY what we keep hearing about in the press - they're in town for CNY and they are here to BUY!

So logically the news crews ask for some visuals. They request to be able to do interviews with some of those prospective Asian buyers.

So what happened next?

MAC President Cameron McNeill claims he doesn't know, so let's try and piece it together.

“We’re trying to understand how this happened right now, and so I’m just trying my best to be open with you and just say that I’m very sorry that it happened,” McNeill maintained that the theme of the story – that Lower Mainland condo sites saw a spike in Chinese buyers around Lunar New Year – was completely true.“I think that the ladies probably fit the profile of the story,” he said. “At the moment I don’t know whose idea that was; I don’t even know if they took it upon themselves to make that up.”

From the Globe and Mail:

“All I can say is that I deeply apologize for having misled the media for being there,” said Mr. McNeill, who said he was out of town over the Family Day long weekend, when the news segments aired. “We were busy and I don’t know if the girls were put up to it, or just put on the spot, or if it happened spontaneously.

From the Vancouver Sun:

“I don’t know all the details about what precisely happened that day. I want to get to the bottom of this. I don’t know if it was an overzealous employee or if this happened in a formalized way.”

That last quote an important one.  Did it happen in a formalized way?

Let me ask you this, dear reader. Take a look at our primary players for a moment. 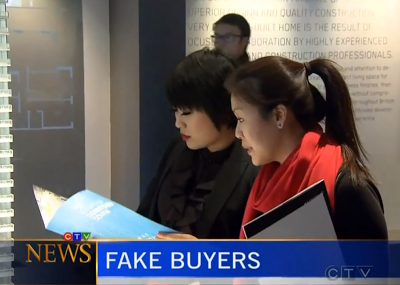 Look at the way they are dressed.

Do these two young, successful, western women - who work as real estate agents - look to you like they came to their office that morning prepared to sell condos to their clients?

No... they are dressed to portray a stereotype.  A western stereotype - of Chinese kids from wealthy Asian families.

The insinuation from the public apology is that a couple of employees, when faced with legitimate buyers who backed out of appearing before TV cameras at the last minute, stepped up to the plate and 'play-acted' something that was would have happened anyway.

It was an impromptu thing. A spontaneous action.

So why are Chris and Amanda dressed that way? Why are they already dressed as stereotypical Asian buyers, caricatures who can now so easily step up and assume that role?

Maybe there was a legitimate couple that did back out (I don't think so, but I will explore this in another post).

Look at the other sales staff at Maddox that day... the ones who are actually playing the role of sellers.  Are they dressed up as Asian caricatures in honour of CNY to pander to wealthy Chinese buyers?  Of course not.  Any realtor who tried that stunt would instantly offend their customers who would immediately walk out.

CBC-TV reporter Matthew Black makes it clear. While the media were at the event, he asked Maddox staff for help in finding a Chinese buyer to do an interview.  One couple suddenly decides they don't want to do interviews for the two camera crews, so Maddox staff ask Chris and Amanda (who are initially reluctant, but then acquiesce) to step in.

So we ask the question again.

If Chris and Amanda are MAC realtors at the presentation centre that day to sell condos when they see their company's photo op suddenly going bad and (on their own) they decided to do an impromptu ad-lib; how is it that they are already dressed in costume, milling in the background, willing to step up to the plate and act out the role?

Is it because that entire presentation centre is already packed with 'fake buyers' who are actually MAC employees? 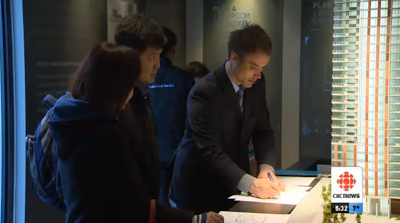 At the very least it seems Chris and Amanda are there to pose as background props for the media presentation, creating the impression for the press (and the public) that the myth of the Asian buyer during CNY is alive and thriving.

And if that's the case, it means MAC set out in a premeditated fashion to fake the visual (and thus, the news) regardless of the legitimate buyer backing out.

This whole charade appears a lot more formalized than McNeill is admitting to.

The more you scrutinize it, the more questions you have.


Please read disclaimer at bottom of blog.
Posted by Whisperer at 12:25 AM