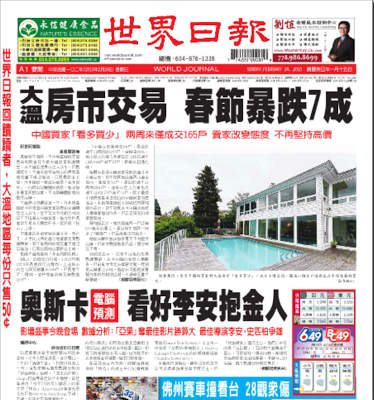 Above is the front page headline of the top North American Mandarin newspaper, the World Journal.

The World Journal is a daily Chinese language newspaper serving overseas Chinese in North America. The newspaper has its headquarters in Whitestone, Queens, New York City and is published in major cities containing large Chinese-speaking populations.  These include Atlanta, Chicago, Boston, Los Angeles, New York, San Francisco, Houston, and Washington, D.C. in the United States as well as Toronto and Vancouver in Canada.

This follow's yesterday's headline from a local Vancouver Asian paper that screamed: 70% Drop in Home Sales Since Chinese New Year.
(Note: the google translation of yesterday's article incorrectly translates the figure 70 as a 7. The news article  does actually call it a 70% drop.  The change in numbers is a google error).
As you can see, the story is gaining wide attention in the Chinese community.
Wasn't it just on February 7th, 2013 that the Vancouver Sun was telling us how "Realtors prepare for Lunar New Year Upswing in Sales"?
In fact it was Cameron McNeill, president of the recently disgraced MAC Marketing Solutions, who was quoted in the article:

McNeil said his salespeople are seeing an increase in activity, including from Chinese buyers. “To me, (Chinese buyers) are a leading indicator,” McNeil said. “What I mean is, when Chinese buyers are active, it is a little bit of a bellwether (for the overall market), and the Chinese are active.”

Of course it was only two days after this article that some of McNeill's employee's staged their infamous media deception to create the impression that Chinese buyers were still queuing up to buy into Vancouver's teetering real estate market.
So it begs the question... if the Chinese buyers are a leading indicator - a "bellwether" for the overall market - and Vancouver Chinese New Year real estate sales just plunged 70%; is the overall market in Vancouver in grave danger of plunging significantly?
Perhaps this is why some of MAC's employees were so desperate to fake the presence of active Chinese buyers?

Why is it we are reading about these stunning Vancouver real estate statistics exclusively in the Asian language press and not in the English speaking press?
(hat tip VMD and goku3)
==================