An interesting development in the scandal known as MAC-gate.  A post has appeared on the MAC Marketing Solutions Facebook page that says: 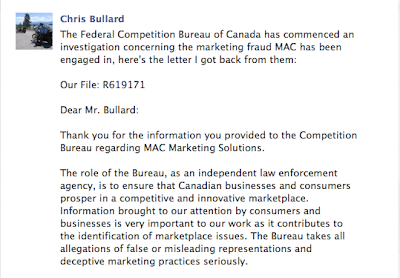 It appears Chris Bullard has been advised by the Federal Competition Bureau of Canada that they have commenced an investigation concerning the fake buyers news story perpetrated by MAC Marketing Solutions on February 9th, 2013.

Quoting the Bureau: "The Bureau takes all allegations of false or misleading representations and deceptive marketing practices seriously."

Now lest you think the Federal Competition Bureau is a toothless organization, they have the power to levy fines of up to $10 million to an organization and up to $750,000 to an individual.

Here are some of the fines levied in 2012 and 2011 for false or misleading representations (click on images to enlarge): 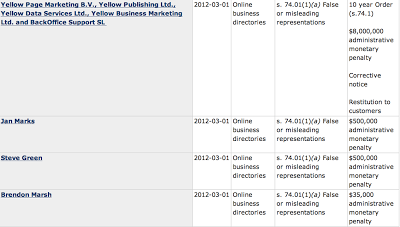 Now as you will recall, there appears to be a number of MAC employees who colluded to perpetrate the story of the fake buyers. Whether or not actual collusion existed will be up to the Bureau to determine.

We also looked up the term 'conspiracy' on wikipedia:

"A conspiracy may also refer to a group of people who make an agreement to form a partnership in which each member becomes the agent or partner of every other member and engage in planning or agreeing to commit some act. It is not necessary that the conspirators be involved in all stages of planning or be aware of all details. Any voluntary agreement and some overt act by one conspirator in furthance of the plan are the main elements necessary to prove a conspiracy."

This could turn out to be one very interesting investigation.

(NOTE: Due to some inappropriate comments, comments will now be moderated before being posted)