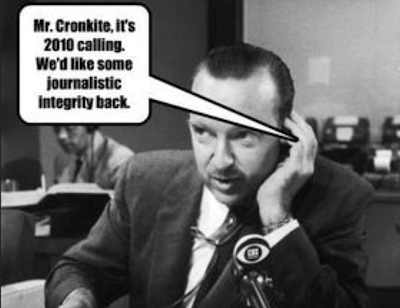 It's been interesting to see some of the reaction to our two recent posts about "Newsvertising" (see here and here).

The issue: paid advertisements dressed up as legitimate news stories, particularly when presented in a way which doesn't clearly inform that what you are reading isn't news.

There are those, like realtor Arnold Shuchat, who understand the importance of what we are saying. From a comment he made to our post on the topic:

Obviously, the real trick these days is finding people with a modicum of integrity. People have a tendency to believe the printed word and to be more ready and willing to accept journalistic reports from a major news source as facts. Well, the newspapers and those who rely on them for their latest market intelligence deserve each other!


One would probably be better served to take a contrarian approach to most newspaper reports dealing with real estate investment. As has been said before, "buy on bad news and sell on good news".


At least when it comes to reporting, the "Blog" has shown that it can weather criticism and using the strength and depth of its readership, can unearth truth to a greater and more objective standard.

Shuchat is absolutely right, this is a story that needs to be told.

Unfortunately there are others who simply don't get it:

The point is that the Vancouver Province/Sun conglomerate has already demonstrated they are willing to take paid advertisements and present them as actual news stories with little or no indication that what you are reading isn't real news.


By doing this, they bring into question the integrity of all the other news stories they publish. The two gallery spots that we focused on yesterday are just examples of the doubt that is raised.

Let's face it, how does a posting comparing the insane real estate in Vancouver with another city in North America end up being profiled in the Vancouver Sun within hours of it being originally posted at Pricey Pads?

To get published in the Vancouver Sun that fast means that the Sun would have had to independently came across the PP article within moments of it being posted, which defies all rational credulity.

Which is why it raises the spectre that the Sun's Gallery feature is probably a paid advertising feature. If it is advertising, the public deserves be told so: 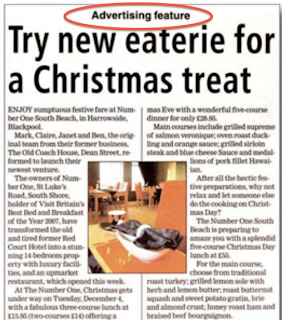 This isn't an issue about Pricey Pads having done something wrong (they haven't, at worst all they have done is bought advertising to promote their site), it's about journalistic integrity.

And when that integrity is brought into doubt, you start to question everything.


Take this Gallery which appeared in yesterday's paper. 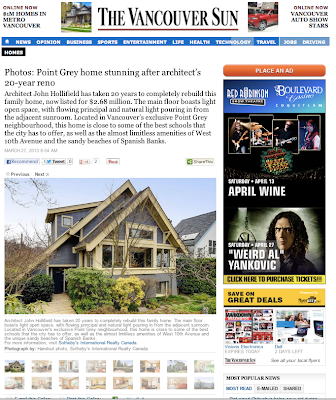 Architect John Hollifield has taken 20 years to completely rebuild this family home, now listed for $2.68 million. The main floor boasts light open space, with flowing principal and natural light pouring in from the adjacent sunroom. Located in Vancouver's exclusive Point Grey neighbourhood, this home is close to some of the best schools that the city has to offer, as well as the almost limitless amenities of West 10th Avenue and the sandy beaches of Spanish Banks.

From the photo caption:

Architect John Hollifield has taken 20 years to completely rebuild this family home. The main floor boasts light open space, with flowing principal and natural light pouring in from the adjacent sunroom. Located in Vancouver's exclusive Point Grey neighbourhood, this home is close to some of the best schools that the city has to offer, as well as the almost limitless amenities of West 10th Avenue and the unique sandy beaches of Spanish Banks. For more information, visit Sotheby's International Realty Canada.


Some might argue that because a well known architect has been labouring for 2 decades to bring this property to market for sale, it's a noteworthy news story. But if you click on the Sotheby's link, you go to actual real estate listing.  There you learn "this home represents the culmination of a full 20 years of progressive refinement."

So basically this guy (who works as an architect) has been doing ongoing improvements to the house he's lived in over the past 20 years and now he's decided to sell it.... and somehow this is news?

It looks like another dressed-up real estate ad to us.


Journalistic integrity is the basic foundation of any news organization. Even Alphabet Arnie understands this.


Please read disclaimer at bottom of blog.
Posted by Whisperer at 8:19 AM