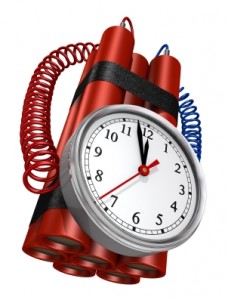 Ever since the 2008 Financial Crisis, two countries have seemed to lead a charmed existence and evaded the world wide credit/housing implosion.
They were Australia and Canada.
Bullish proponents who claim things were different in Canada always pointed to Australia as another example of how a sound banking system and Asian investment were proof that our nation would escape the implosion of a 'supposed' housing bubble.
But as we have covered on this blog numerous times, Australia is starting to see it's bubble implode.
The latest missive from the Land of OZ heralds that Home owners are facing loan repayment disaster. And one has to wonder... is this a preview of what's to come in the Lower Mainland.

Many people who bought houses on Melbourne's fringes in recent years could be facing financial ruin after a slump in prices has left them owing more to the bank than their homes are worth, experts have warned... (this has) led some financial experts to warn of a 'depreciation time bomb' of negative equity for home owners in fringe suburbs, who owe more to the bank than the value of their homes... there is a risk that some purchase decisions that were made on the expectation of higher long-run average growth rates may have to be reassessed.

In Australia, as in Canada, many young buyers have been enticed into the market with emergency level interest rates since 2008.

Kevin Bailey, principal at Shadforth Financial Group, said his warnings three years ago of a ''homegrown subprime crisis'', created in part by inflationary first home buyer incentives, are now playing out. He said the schemes enticed mostly young people, without savings, to borrow heavily and pay a premium for low quality housing in poorly serviced locations.

"Lots of baby boomer parents who have made money out of property gave sage advice to children to pour their money into bricks and mortar because prices double every seven to 10 years Young people who were sold that lie will find it very difficult to escape and it's a tragedy."

The reality is that both Canada and Australia merely delayed the inevitable with their interest rate policies.
What we read is happening in Melbourne is merely prologue for the Lower Mainland.
Will we see articles like this in the Sun or the Province by the New Year?
==================

Please read disclaimer at bottom of blog.
Posted by Whisperer at 10:03 PM