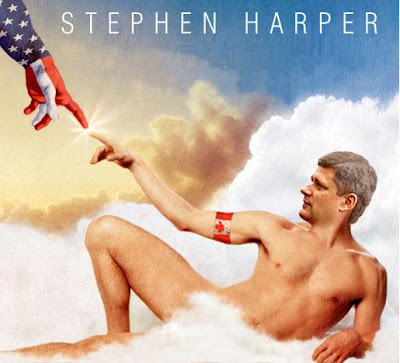 To summarize - our colleague over at america.canada blogspot made the eloquent case that CMHC's mortgage insurance obligations present a looming credit quagmire that could put Canada in a far more precarious real estate position than the United States was in during 2006.

CMHC is well on it's way to insuring well over $500 billion in securitized mortgages and lines of credit by the end of 2010. It will also have issued over $600 billion in outstanding mortgage insurance.

So what would happen if Canada suffered a dramatic real estate decline (like the United States just suffered)? Who would be on the hook for these insured mortgages?

Why, the Government of Canada of course... meaning you and I.

Now our blogger colleague at america.canada didn't just write about this looming threat on his blog, he actually contacted the Prime Minister directly to express his concerns.

And earlier this month he received the following reply (click on image to enlarge)... 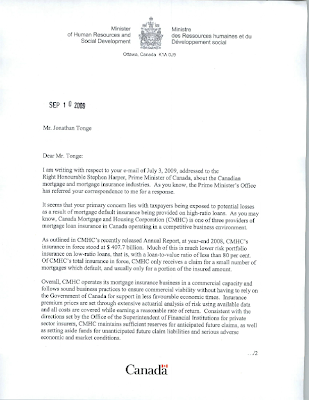 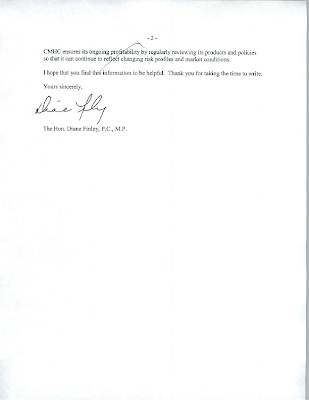 So what do we learn from our esteemed Prime Minister and his government?

It seems a chunk of this CMHC insurance is now protecting loans with a loan-to-value ratio of less than 80%. Rapidly increasing home prices of the past decade account for much of this.

What will happen if real estate values collapse?

More intriguing, however, is the denial mindset of our Prime Minister.

The letter asserts that only a small portion of Canadian homeowners default on their mortgage.

That's all fine and dandy today when the carrying costs of debt have been consistently made cheaper causing home prices to edge higher and higher.

But what happens when interest rates rise and home prices fall? That's when the real defaults will occur.

A problem so callously shrugged off could become a anchor around our collective necks.

If rising interest rates are indeed inevitable, then CMHC is insuring loans that are not sustainable.

CMHC is enabling banks to put people into homes at prices that can not be supported at higher interest rates or shorter amortizations.

According to page 4 of the CMHC Housing Report "Housing Now, Canada", demand for variable rate mortgages began to dramatically increase in 2008. 30% of all Canadian mortgages are now variable rate, up from 3% in 1998.

Fixed 5 year terms account for almost 70% of the mortgage market. Almost all fixed rate loans are insured (100%), securitized and sold to investors.

The reality is that all of these five year mortgages are no different from all those US mortgages that dangled 1,2 and 5 year teaser rates at the front end of them.

And the basket of variable rate mortgages that now comprise 30% of all mortgages?

Even if the mortgage holders are bright enough to lock in to five-year mortgages now (and let me assure you... they are not that bright), all they will be doing is avoiding the inevitable.

This is nothing less than a ticking time bomb that has the potential to devestate government finances. If only 10% of that $600 billion in secured mortgages defaults, our government is on the hook for $60 Billion.

Significant when you consider our government is grabbling at this very moment with the largest deficit in Canadian history: $50 Billion.

How comforting, then, to know that our Prime Minister (and his government) are basically turning a blind eye to the potential threat.

Please read disclaimer at bottom of blog.
Posted by Whisperer at 4:22 AM