Another significant warning about interest rates... 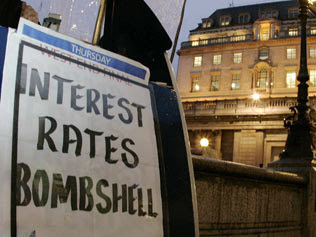 Time after time I have said that when it comes to the Real Estate Bubble in our little hamlet on the Edge of the Rainforest, the issue is all about interest rates.

When they go up dramatically, the bubble will burst in spectacular fashion.

Until they do, the bubble bears will have to withstand the taunts and barbs of the bulls.

And while bears have uttered the warning for several years now, rates have been artificially suppressed by stimulus initiatives and the bulls have chortled about it every chance they get.

Bears have also had to endure the criticisms from friends and family who chide them because the collapse has not come.

For those of us who can see what is coming, the taunts are insignificant.

Unless property has been bought to be flipped, the time frame is irrelevant. Buying five years ago or buying yesterday is immaterial... interest rates will destroy you because the amount of your mortgage is so massive that the amount still owing cannot withstand the level of interest rates we are about to be saddled with.

And the fact of the matter is most have not bought their real estate to flip.

And judging by the warnings from those who matter, that will be sooner rather than later.

Bank of Canada Governor Mark Carney has come out with his sternest warning yet of what lies ahead.

In a speech to the Economic Club of Canada today in Toronto, Carney said efforts by various governments to stimulate the economic recovery are keeping borrowing rates low. But...

Honestly... short of pounding you over the head with a shovel, how plainer can the looming future be made for you?

Canadians, of course, will respond with the same fairy tale denial that is almost a mantra now... "the government would never allow interest rates to go very high because it would hurt Canadians too much".

Okey-Dokey... Joe six-pack, allow me to introduce you to Stephen Harper, Prime Minister of Canada:

If you didn't catch it, that was your Prime Minister officially hanging you out to dry.

For years the refrain has been "buy now or be priced out forever."

For those who can read the writing on the wall, the refrain has become, "sell now or lose out on those capital gains forever!"

Problem is, too many Canadians are illiterate.

Please read disclaimer at bottom of blog.
Posted by Whisperer at 3:54 PM