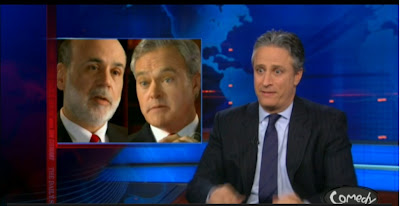 In case you didn't see it, Jon Stewart offered his observations on US Federal Reserve Chairman Ben Bernanke's Sunday interview with 60 Minutes.

I can't embed the clip, but you can watch by clicking here.

Bernanke made this statement in response to the Fed's actions of creating money out of thin air and buying government bonds.

So, as Stewart notes, the difference was that then the Fed was creating money out of thin air to buy corporate assets and now it's buying government bonds.

How is it that you were printing money then, but now you're not?

Stewart observes, "I guess Bernanke was looking at the average age of the 60 Minutes viewer and betting that anyone who saw him last year is dead now."

While humorous, it does expose something that many critics are sharply focusing on: Bernanke came on national TV and lied to the American people.

All of this is followed by news that US Treasuries have suffered their biggest sell off since the collapse of Lehman Bros (see reprint of Financial Times story on this blog).

Thus when QE is supposed to be lowering interest rates, they are rising.

This dynamic is the one which all the R/E shills in the Village on the Edge of the Rainforest remain oblivious/ignorant to.

Bernanke can say he will keep interest rates low for years to come. But the market vigilantes have the ultimate say.

I've posted on this blog numerous times the fears stated by former Federal Reserve Chairman Greenspan that this could happen.

Dramatically higher interest rates are coming. It's only a matter of time.

And when they come, as Bank of Canada Governor Mark Carney has been warning for months now, you don't want to be holding debt of any significance that you can't service at interest rates at the historic norm (8.25% or higher).

People mock the Bears because the collapse has not come yet and anyone who has bought in the last 7 years is way ahead than if they had listened to the Bears.

But unless they cash in on that equity now, hardly any of those buyers will survive what is coming.

Which is why two and a half years ago I became a staunch real estate bear and highly advocate liquidating debt, eschewing debt accumulation and investing to prepare for what is coming.

Regrettably few will appreciate the advice until it is too late.