To infinity and beyond... 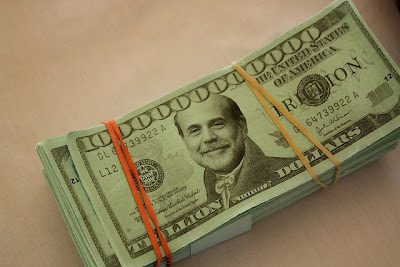 In a move that comes as a surprise to some, President Obama announced a tentative deal with Congressional Republicans on Monday to extend the Bush-era tax cuts at all income levels for two years as part of a package that would also keep benefits flowing to the long-term unemployed, cut payroll taxes for all workers for a year and take other steps to bolster the economy.

This extension will cost $900 Billion - equal to QE2. In essence we have just seen QE3. But how does cutting back on government revenue deal with the massive looming debt problem the United States faces?

It doesn't of course.

And as people like Jim Sinclair have been saying for years, the political realities both in taxation and quantitative easing make prediction here all too easy.

America (and Europe) have no practical way out of the debt problem – none.

They are going to inflate and spend continuously as the problem is kicked further down the road.

Which is why I believe you will see a rush into Gold and Silver in the foreseeable future. And faithful readers know I favour silver over gold.

Eric Sprott sees it too. The Toronto-based money manager whose Sprott Hedge Fund returned about 496% in the past nine years, outlines his thoughts in an article in the Globe and Mail:

As I have been saying for almost 2 years now, a huge opportunity lies ahead.