Did a former Global-TV reporter set the stage for the entire MAC deception? - Updated 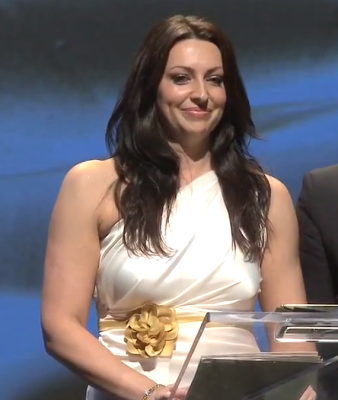 Ms Briggs is a Sales Director at MAC Marketing Solutions and has been with the firm since 2004. 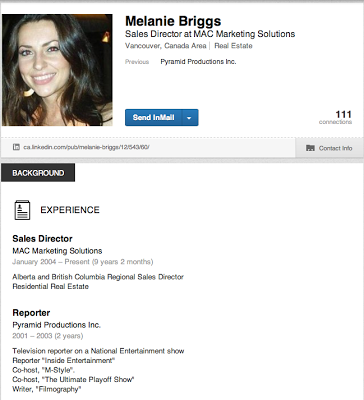 Prior to working at MAC, she worked in Television as a reporter on the show "Inside Entertainment", was co-host of "M-Style" and co-host of "The Ultimate Playoff Show".

Her bio on the Ultimate Hockey Show says:

Melanie Briggs is best known by her legions of male fans as co-host of M-Style on Men TV. Mel was also seen nationally as a reporter for Global's Inside Entertainment and Movie Central's Inside Movies.

Now having someone with media experience on your staff can be an invaluable resource and as a former reporter with Global-TV, she is well positioned to use her connections to advance MAC's agenda.

Briggs' polished TV media talents are on display for all to see in this youtube clip showing her as the host for MAC's Golden Cube annual awards gala, an annual company shindig to reward top performers. Assuming MAC doesn't delete this too, here is that promotion clip:

As you know by now, the infamous MAC Marketing Solutions media deception was engineered around the Chinese New Year celebrations.

In acknowledging his company's misdeeds, MAC President Cameron McNeill is quoted as saying:

"All I can say is that I deeply apologize for having misled the media for being there. We were busy and I don't know if the girls were put up to it, or just put on the spot, or if it happened spontaneously."

That's going to be a very important question. Were "the girls" put up to it? And if so, by who?

When queried by the Vancouver Province Newspaper as to whether the two employees were asked to play roles by bosses, he said,

Hmmm... we'll revisit that one another day.

Back to Ms. Briggs.

It may interest you to know that Melanie Briggs was involved in this January 25th, 2012 CBC news story which was a CNY pre-cusor story for last year's Chinese New Year sales blitz.: 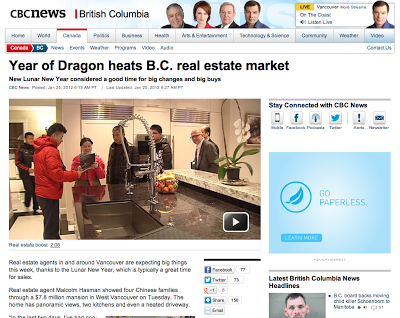 Real estate agents in and around Vancouver are expecting big things this week, thanks to the Lunar New Year, which is typically a great time for sales.

Real estate agent Malcolm Hasman showed four Chinese families through a $7.8 million mansion in West Vancouver on Tuesday. The home has panoramic views, two kitchens and even a heated driveway.

UBC Prof. Duanduan Li says the Year of the Dragon is auspicious for big changes, including big purchases.

"In the last two days, I’ve had non-stop telephone calls from all the top Chinese agents in the city to show my properties,” Hasman said.

With recent volatility in the stock market, buyers could be even more eager to invest in property, said Melanie Briggs, of MAC Marketing.

“Based on what we've seen in years past in our downtown projects, we've definitely seen at least double the volume of sales,” said Briggs. “So I wouldn't be surprised if we were to see triple the number of sales.

(a sales period which, as we now know, was an absolute flop because the wave of Asian buyers failed to materialize)

Given Briggs' background, and her apparent lead role in things media-related for MAC, you've got to assume she played a prominent role in co-ordinating and setting the stage for the company's TV media foray with CBC and CTV on February 9th of this year.

So would it be natural to also assume she was in attendance to liaise with the media that day?

If so, how is it that this former member of the television profession, this former reporter with Global-TV, and apparent media relations expert with MAC... how is it she hasn't been heard from yet?

Supposedly "the girls" found themselves in the position of perpetrating this fraud without senior MAC management knowing and intervening.

Where was Melanie Briggs?

Update: The post originally identified the CBC news story of January 25th as 2013 when it is in fact from 2012. That has been corrected.