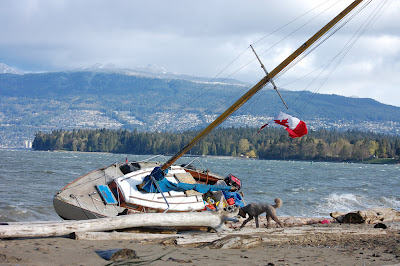 Back in April we posted that the noose was tightening on the larger periphery around the Village on the Edge of the Rainforest.
The Victoria Times-Colonist reported that, "The first quarter of 2011 has proven to be a tale of two real estate markets in B.C. - the Lower Mainland and everyone else."
But as the dog days of summer arrive is the level of concern starting to rise in the Lower Mainland?
One local Vancouver realtor sent out the following comments in an email last week:
Not exactly a Tony Robbins moment, is it?
Another Vancouver Realtor, Larry Yatkowsky, has also chimed in with less than bullish comments on the current state of the market:
Across the Georgia Straight the Capital City continues to feel the pain.
The Victoria Times Colonist reports that "for the second straight month, the number of homes for sale remained at 15-year highs while the average selling price dropped in all categories."
There are now nearly 10 months of inventory (generally 6.5 months of inventory is considered balanced).
Conditions have lead one Victoria area Realtor to state that the consensus among his R/E colleagues is that offers are coming in well off the listing price.
Could it be that the tide has finally turned on the Canadian West Coast?