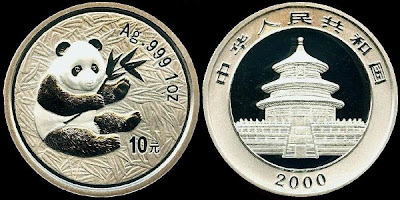 There is a rumour circulating on the yahoo chat boards which is intriguing enought that it is worth posting.
But let's be clear... at the moment it is just a rumour.
Faithful readers will recall that when Silver shot from $18 to almost $50 in late 2010/early 2011, the surge was propelled by a short squeeze on Silver.
While the squeeze was occuring, the Silver community was divided as to the legitimacy of  a group of ex-JP Morgan traders fired by Blythe Masters in July of 2010 who were supposedly leading the short squeeze charge.

Known as the 'Wynter Benton group', they were supposedly looking to wreck havoc on JPM using their own naked silver shorts.
Messages they posted were routed through the yahoo chat boards and many of those messages proved to be very accurate about the squeeze occuring in the Silver community.
After a few months off the radar screen, the group has resurfaced making a claim which, if true, would be a dramatic game changer.
The 'group' is now alleging that a major sovereign central bank has been accumulating physical silver as a reserve asset and will soon publicly announce this fact.
That 'major sovereign central bank' is clearly China.
There is precedent for such a steath shocker of a move.
Back in April of 2009, China revealed a stunning rise in it's gold reserves.
Hu Xiaolian, head of China's secretive State Administration of Foreign Exchange, which manages the country’s $1,954bn in foreign exchange reserves, revealed China had 1,054 tonnes of gold, up from 600 tonnes in 2003.
China had quietly almost doubled its gold reserves to become the world’s fifth-biggest holder of the precious metal.  This stunning move caught the world off guard. No one had been aware that China had been accumulating so much Gold to add as a reserve asset.
The very next year, when statistics were released in 2010, China revealed it had gone from exporting 100 million oz of silver a year in 2007 to IMPORTING 100 million oz in 2010.
If China does now make an official announcement that it is accumulating that Silver as a 'reserve asset', Silver will surge massively in value.
Even if it isn't true, the rumour value alone could have a strong influence on markets.
We do live in interesting times.
==================

Please read disclaimer at bottom of blog.
Posted by Whisperer at 7:47 PM