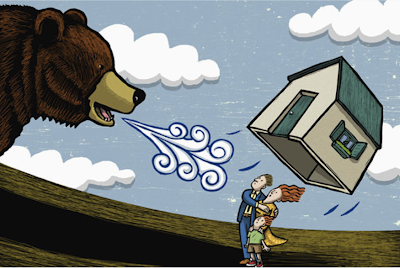 Yesterday we mentioned that one of the most interesting side shows in the public arena right now is in watching the frustration develop by the real estate industry as they watch their ability to manage their message in the media slip away.

For years they have easily massaged and manipulated the mainstream message about real estate,  but that ability seems to be slipping away as the mainstream media finally begins to highlight the conditions around our housing bubble.

That frustration was brought in a post by the Chief Economist of the British Columbia Real Estate Association (Cameron Muir) who is “now convinced that we will never hear the end of housing bubble speak.”

Muir's comments come from an article in BC Homes titled, "Speaking in Circles: Time to burst the bubble speak."

Muir, as we all know, has spent the better part of the year countering bubble fears by arguing that if we hadn't seen the market collapse after the Great Financial Crisis in 2008, we would we now?  Where is the big financial shock that will push us over the edge?  Why all the fears our bubble is bursting?

"The premise is now as firmly entrenched in popular consciousness as carbon emissions and TMZ. It has taken the form of idolatry in the blogosphere, where any countervailing narrative is demonized. It has catapulted university dropouts into media darlings because of a hackneyed webpage and an opinion. It has been tarted up by so-called experts who predict impending doom year after year, despite being completely wrong every time."

It seems ongoing events have struck a nerve in the reserved and rational nature of BC's Pumper-in-chief.

Clearly Muir is feeling the frustration:

"Now, I’m not wearing tinted glasses. Housing markets go up and they go down. However, my point is that sharp and significant declines in home prices are usually created by massive economic shocks, like the 21 per cent mortgage rates and recession of 1982. Yes, there can be short term speculative bubbles that float back to earth after the circus leaves town, but home prices in Vancouver, for example, have been incongruous with other Canadian markets for decades."

"The big test was 2008. That was the year of the doom sayers, when the largest financial crisis since the Great Depression besieged us and the collateral damage hurled us into a global recession, one from which we still haven’t fully recovered. The airwaves were all a buzz with end of the world prophets and those predicting home prices would be chopped in half, at least. It was going to be the big one! The housing market had gone through a significant inflationary period leading up to 2008. Unlike today, speculation was clearly evident. Accusations abounded that Vancouver was overvalued, unsustainable and frothy. One financial institution even had a publication called Housing Bubble Watch, now defunct, in which Vancouver was always the straw man.

So what happened? Home prices fell 15 per cent from peak to trough, but that was short-lived. Indeed, once the clouds of uncertainty dissipated only a few months later, buyers came back in droves.

The most dramatic turnaround ever recorded occurred in Vancouver during 2009, when the year began with 1980s level consumer demand and ended with sales tracking near record levels. Prices came right back to where they were before the crisis, and have stayed there, for the most part, for the past three years. If such a severe financial crisis and global recession couldn’t trigger a meltdown of the housing market or pop any asset balloon, what could?"

Of course we all know that the only thing that allowed up to escape the implosion of the 2008 Financial crisis was the ongoing injection of the crack cocaine of easy credit as CMHC cap was forced upward from $100 Billion in 2006 to $600 Billion in 2012.

Should we increase it another six fold over the next six years?  Should we go from $600 Billion today to $3.6 Trillion in 2018?

This is the blindness of a long term speculative mania. When even seasoned, rational real estate agents become blind to the conditions of the ever growing bubble.

"The main misconception about housing markets is that they behave like the stock market. They don’t. Bad news can drive stocks lower in a matter of seconds, whereas homes are relatively illiquid; they take a long time to sell and have higher closing costs. In addition, owner-occupiers typically don’t speculate with the family home. In times of hardship, the home is typically the last thing to go. Instead, they hold off on other expenditures like lattes, movie tickets, new TVs and vacations."

But our Canadian market is filled with speculative mania.  In Toronto it is estimated that 90-95% of all condo presales were to speculative investors.  In Vancouver the epidemic of pre-sale condo and single family home flipping is almost as extreme. It won't be the panic sale of the 'family home' that triggers any collapse.

"In a market that has a well-diversified economy and expanding population, fire sales are extremely uncommon. Unless there is household financial catastrophe on a large scale, potential home sellers simply wait until market conditions improve."

Our's is a well-diversified economy? Does our market have incomes that support these valuations?  Can we count on money from other markets (where incomes can support those valuations) endlessly coming into our hamlet for that support?

"I write this piece as home sales in Vancouver and many other markets stagnate and homes prices tread water (see the Canadian Real Estate Association’s Multiple Listing Service® Home Price Index for an accurate reading). I have no doubt that the voices of impending doom will soon renew their bellicose refrain. Perhaps their tea leaves will be right this time and the market will indeed collapse, leaving homes selling for 50 cents on the dollar. I’d put my money on that refrain continuing for a long time to come."

Presumably Muir wants to "put his money on that refrain" (from the bears that the market will collapse) because the bubble won't burst and bears have to keep saying it it will.

But the issue isn't the voices of impending doom.

Bears cannot blow down the housing bubble no matter how much they are demonized. The Federal Government won't change policy because of the clamouring of the blogosphere.

The issue is the mounds of debt.  And it seems we may have truly achieved that mythical level of tulip bulb blindness to the real issue.