How do the Chinese view the Gold Market? 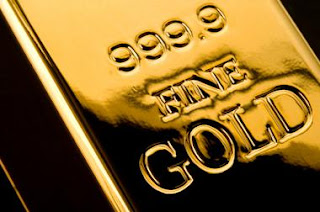 Great article yesterday by Jeff Clark of Casey Research titled: "How do the Chinese view the Gold Market".


Have you ever wondered what the typical Chinese gold investor thinks about our Western ideas of gold? We read month after month about demand hitting record after record in their country – how do they view our buying habits?

Since 2007, China's demand for gold has risen 27% per year. Its share of global demand doubled in the same time frame, from 10% to 21%. And this occurred while prices were rising.

Americans are buying precious metals, no doubt. You'll see in a news item below that gold and silver ETF holdings just hit record levels. The US Mint believes that 2012 volumes will surpass those of 2011.

But let's put the differences into perspective. This chart shows how much gold various countries are buying relative to their respective GDPs (click on image to enlarge). 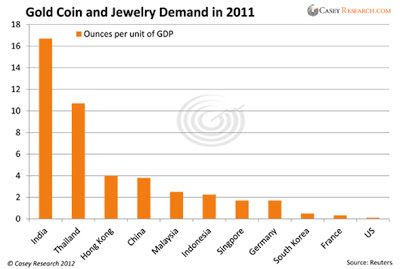 It's widely believed that the majority of the gold flowing into Hong Kong ends up in China, so its total is probably close to double what the chart reflects. Even if none of it went to China, coin and jewelry demand is 35 times greater than the US, based on GDP.

The contrast between how our two nations can buy bullion is striking…
Some will point to cultural affinity to account for the differences. There's some truth to that, though this is a much greater factor in India. Even there, gold jewelry is not viewed as a decoration or an adornment; it's a store of value. It's financial insurance in a pretty bow. In India, gold can be used as collateral, regardless of its form. It's not just an investment that they're trying to make money from; it's more important than that.

But certainly the differences can't all be attributed to culture…

You've likely heard how government leaders in Beijing have been encouraging citizens to buy gold and silver. This would be akin to seeing your local Congressman or President Obama appearing on TV and imploring you to buy some gold and silver. (Utah made gold legal tender, but it was mostly a symbolic move.)

Chinese radio and TV spots, along with newspaper ads, talk about "safeguarding your wealth" and putting "at least 5% of your savings" in precious metals. I haven't seen this here except from dealers on cable TV. Can you imagine Ben Bernanke appearing in a commercial duringAmerican Idol, encouraging you to buy gold Eagles?

No, what I hear from politicians about precious metals is nothing but the sound of crickets chirping, save Ron Paul. And the mainstream continues to claim gold is in a bubble. We've pointed it out before, but in case any of them are reading, there are two criteria for a bubble: first, a massive price increase, such as the gold price doubling in less than 7 weeks like it did in 1979-'80... which, of course, hasn't occurred in this bull market. (Yet.)

The second criterion is widespread participation on the part of the public. I don't hear celebrities and TV anchors bubbling on about the latest gold stocks. Most people I know outside Casey Research aren't talking about the great price they got on a silver Maple Leaf. Most investors I talk to say their friends, family, or co-workers aren't scrambling to snatch up gold Eagles. And the #1 reason we're not in a bubble is because Eva Longoria still hasn't asked me out on date – something she'd only do because I'm a gold analyst.

And with apologies to those of you who do know history, I think the Chinese have studied history a little better than many of us. The lessons are right in front of us, though I don't hear this kind of data very much on CNBC…
What do we hear instead? That the country will drop into recession if current amounts of spending and outlay of benefits are reduced. I think it is quite the opposite; it will be worse if our leaders continue down this path of debt, deficit spending, and printing money.

What I'd love to see on CNBC is a spot with Doug Casey saying this: "Anyone who thinks they have any measure of financial security without owning any gold – especially in the post-2008 world – is either ignorant, naïve, foolish, or all three." I bet that'd get the airwaves buzzing.

It must seem strange to many Chinese that we continue to believe in our dollars, Treasuries, and bonds more than gold and silver. And it's not just China that would view our investing habits as peculiar. Indeed, as the above tables implies, our views on precious metals are in the minority.
My fear is that regardless of what form the fallout takes, many of my friends will be caught off guard. Probably many of yours, too. As the value of dollars continues to decay and inflation creeps closer and closer and then higher and higher, many investors will feel blindsided. Many Chinese citizens will not.

Given China's aggressive buying habits, my suspicion is that many of them will probably wonder why we didn't see what was happening all around us, why we didn't learn from history, and why we didn't better prepare.


Please read disclaimer at bottom of blog.
Posted by Whisperer at 5:04 PM