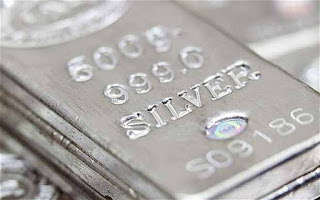 Some followers have lamented about the dearth of posts on the topic as of late.  Reality is the movement in real estate is the bigger story right now.  Silver and Gold have been in holding patterns and there hasn't been much to talk about.

That may be about to change.

And it is the British newspaper, the Daily Telegraph, that catches our attention today.

In an article yesterday, the Telegraph proclaims: Silver price to 'increase 400pc in three years'

Silver will increase in value five times over the next three years, according to mixed asset fund manager Ian Williams.

"Silver is about to enter a sustained bull market that will take the price from the current level of $32 an ounce to $165 an ounce and we expect this price to be hit at the end of October 2015," he predicted.

"This forecast is based entirely using technical & cyclical analysis and is in keeping with the mathematical form displayed so far in the bull run that has taken Silver from $8 an ounce in 2008 to its current price of $32 an ounce – having hit $50 an ounce in 2011."
Mr Williams said that the silver price was more volatile than gold, but that he expected silver to continue to dramatically outperform gold.

The Charteris manager said that macro fundamentals were supportive for the silver price, such as the re-election of President Obama, who supports Ben Bernanke's policy of quantitative easing.

"Strong demand for precious metals will remain as long as we have QE, which do well with each round of money printing. QE is bound to lead to inflation at some point and at that time, real assets will do best," he said.

"Investing in a fund that holds a range of precious metals gives you positive diversification and less reliance on just gold."

This follows recent observations that, despite naysayers claiming gold is falling out of favour with large buyers such as China, that 2012 is turning out not only to be a record year for gold purchases by China - but that China is now officially saying it must add to Gold Reserves to promote Yuan globalization.

China needs to add to its gold reserves to ensure national economic and financial safety, promote yuan globalization and as a hedge against foreign- reserve risks, Gao Wei, an official from the Department of International Economic Affairs of Ministry of Foreign Affairs, writes in a commentary in the China Securities Journal today. While gold prices are currently near record highs, China can build its reserves by buying low and selling high amid the short-term volatility, Gao writes in newspaper. China’s gold reserve is “too small”, Gao says

Gao Wei is a Chinese official with a key political post. And he has just given the first hint that China is preparing to give its official gold far greater focus.

China has not given an update of its official holdings of Gold in nearly 4 years (2009).  At that time they reported they moved from 500 tonnes to just over 1000 tonnes.

The Chinese government is secretive about its gold diversification and buying and does not disclose gold purchases to the IMF.

In 2009, State Council advisor, Ji said that a team of experts from Shanghai and Beijing had set up a task force to consider expanding China’s gold reserves. Ji was quoted as saying "we suggested that China's gold reserves should reach 6,000 tons in the next 3-5 years and perhaps 10,000 tons in 8-10 years”.

China is likely to have been quietly accumulating another 1,000 or 2,000 tonnes in recent years.

Whenever they do announce their updated holdings, it will no doubt create the same firestorm of interest it did back in 2009. The very low level of the People's Bank of China's gold reserves vis-à-vis their massive foreign exchange exposure and compared to western counterparts gold reserves is of continuing concern to the Chinese.

When the time comes that China releases an IMF update on its official reserve holdings, the impact on the price of gold will be measured in days if not hours.

Much like the impact on our real estate, it is not hard to foresee what is coming for both Silver and Gold.


Please read disclaimer at bottom of blog.
Posted by Whisperer at 4:00 PM