MAC-gate: What actually happened here? It's time for a press conference to se the record straight - Updated

The more you examine the failed MAC Marketing Solutions PR media event (and subsequent media apology), the more you come away with the belief that this was a scripted, planned and practiced event.

It certainly was not the actions of one "overzealous employee", as MAC President Cameron McNeill has suggested.

Everyone has focused on the two central players in the fraud, Amanda Lee and the fictitious 'Chris Lee'. But this saga involves many more MAC employees.

What about the role played by the lead MAC representative in attendance that day, Nic Jensen? He knew who his two employees were and he watched the charade unfold without saying anything.

And what of the blonde MAC sales representative moving the 2 fake MAC buyers through the display suite for the benefit of the press?  She knew who they were: 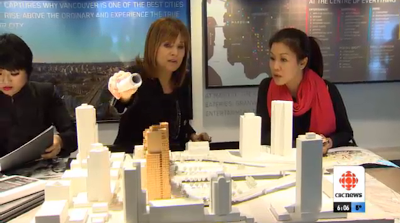 And who better to set it all up than Melanie Briggs, MAC Marketing PR rep and a former Global-TV Inside Entertainment reporter? CBC reporter Matthew Black says he was told Melanie was going to be in attendance, what is her role here?

And then there are "the girls" themselves.

Why are two MAC realtors, presumably at the presentation centre to sell condos, already dressed in costume as stereotypical young Asian buyers?  When the press arrives, they are milling about in the display suite, already in character and prepared to play out their role. If this was "an impromptu" action, why weren't they originally introduced to the news teams as MAC sales agents?

The most important player in this charade is the fictitious "Chris Lee".

Her performance is nothing short of impressive:

From the excellent CBC-TV coverage of the fraud, we are told:

Kirk Williams: Matthew Black was the reporter on the story.  He asked marketing staff for help in finding Chinese buyers.

One couple didn't want to do interviews. Initially the two women were shy too.

Matthew Black: A few minutes later that story changed again and this time they were going on camera. And this is how we met Chris and Amanda.

So Chris and Amanda play coy with the press initially and then emerge to engage the waiting press in their charade. It's a cat and mouse game that certainly guarantees the press will go gently on them.  Especially if 'Chris' is nervous about the lies she is about to tell.

But 'Chris' shines in her role as an Asian home buyer: 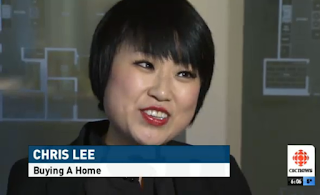 It's a convincing performance.  Too convincing, we say. Especially since we now know it's all a fraud.

Her accent is great.  She hits all the talking points. All while under the glare of lights from two television camera crews. It's an outstanding display of calm and collectiveness while spinning her fable.  And it's all supposed to be an impromptu, ad-lib performance?

I doubt many of the junior anchors on any of the local TV networks could display a higher level of composure during live coverage of a news event.

If this charade was ad-libed, this girl missed her calling.

It has been five days now since the story of MAC's deception exploded in the news. It is clear numerous MAC employees were involved. MAC President Cameron McNeill has had ample time to investigate and ascertain what happened here.

It is time to end the rampant speculation on the internet by calling a press conference and providing a detailed accounting of what transpired.

McNeill owes an explanation to the media (whom MAC duped), to the broader real estate community (whose reputation MAC has irrevocably damaged), and to the general public (the ultimate targets of this fraud).

We need to know exactly what happened, who was involved, how much of it was planned and who knew about it in advance.


Please read disclaimer at bottom of blog.
Posted by Whisperer at 8:11 AM