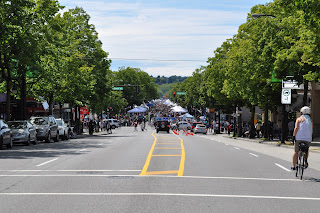 Took the day off and wandered down to Greek Days in Kits yesterday.
As you can see, tons of people in attendance.
If you've never been to Greek Days, the festivities all revolve around one basic theme - food.
Wandering the internet this weekend, the Canadian real estate blogosphere was also focused on one basic theme too: examinations and criticisms of 'the week that was.'
In describing last weeks events, a number of different sites invoked the phrase: "Flaherty's Folly" to describe events.
I agree with the moniker... but I would broaden the perspective in applying the term.
History won't remember 'Flaherty's Folly' as the sole actions he took last week. Instead it will refer to the past six years.
Let's wind the clock back 10 years and review.
In 2002 total outstanding mortgage debt in Canada was a cool $467 billion.
These mortgages were on the whole issued to households with good credit, and to people with proper downpayments. CMHC insured a small portion of this debt.
In 2003 CMHC decided to remove the price ceilings limitations. That is, it would insure any mortgage regardless of the cost of the home.
In 2007, after years of lobbying, the now defunct AIG found new hope with a newly elected Conservative government.
AIG was now permitted to insure high risk Canadian mortgages.
CMHC was also permitted to issue mortgage backed securities and exchange these on the open market.
At the same time, the Conservative government launched a radical policy that allowed CMHC, AIG & GE to insure 35 year amortizations that were coupled with 0% down payments. A few months, but before 2008 - this was expanded to 40 year amortizations.
Thanks to Canada economic stimulus package of 2007 the mortgage market radically changed.
Historically high home prices continued to gain steam. High risk borrowers flooded the real estate market.
Throughout 2007, the average Canadian home buyer who took out a mortgage had only 6% equity in their home. The 6% equity is or equals the national average downpayment for all mortgages including home buyers who traded up to more expensive homes.
In 2008, Canadian home prices started to dip as affordability became the worst on record in many cities.
CMHC publicly admitted that it was ordered to approve as many high risk borrowers as possible to prop up the housing market and keep credit flowing.
In 2008 some 42% of all high risk applications were approved, a 33% increase over 2007.
Between the beginning of 2007 and 2009 Canadian Banks increased their total mortgage credit outstanding listed on their books by only 0.01% -- possibly the smallest amount of change in post WWII history.
Mortgage Securitization has accounted for 90.5% of all growth in total Canadian mortgage credit outstanding since 2007.
The cap on the Canadian mortgage securitizaton market has grown from
In 2009 CMHC indicated in its plan that it will insure $813 billion via a combination of mortgage insurance and mortgage-backed securities (MBS) by the end of that year.
In 2009, at the height of a global recession, we started to see many individuals  being granted $500,000 - $800,000 mortgages for their first home purchase if their household income ranges from $110,000 - $170,000.
It forced the Canadian Government to raise the cap on CMHC insurance to $600 Billion. But at these rates of progression, it only took until 2012 for the cap limit to fill up.
In a February 3rd, 2012 article in the Vancouver Sun, the daily paper asked "Is the mortgage industry running out of money?" as CMHC closed in on their $600-billion cap for mortgage insurance.
Think about it. In 2006 that cap was $100 Billion. Six years later it is hitting $600 Billion.
In that one statistic alone lies the real foundation of what caused Real Estate values to skyrocket in Vancouver and the rest of Canada.
The explosion in real estate values was fuelled by the crack cocaine of cheap, easy money... it's that simple.

And now the supply of drugs is being drained away.

This is the fourth time in just four years that the government has made changes to mortgage rules. The first change occurred in 2008, when they shortened the maximum amortization period from 40 years to 35. In January of last year, the government announced that it would be reducing the maximum amortization period of government-backed insured high-ratio mortgages from 35 years to 30 years. Now it has reduced them from 30 to 25 years.

Please read disclaimer at bottom of blog.
Posted by Whisperer at 10:03 AM