Question: "What is this coin worth?"
Answer: "What will you pay for it?"
Before I lead into today's post, a quick note to announce the launching of the Village Whisperer on Twitter. You can find us at @village_whisper. There have been issues posting on Facebook so it's time to give Twitter a chance after having followed others for a while now. For those who have requested to follow in the past month, finally just figured out you had to be approved - lol.

As Canada Day approaches, I can't help but thinking of the coin pictured above.
A coin collector friend of mine brought it out on the weekend and used it in an analogy about the real estate market.
The coin is a Special Edition Proof Silver Dollar issued by the Royal Canadian Mint (RCM) in 2005 to commemorate the 40th Anniversary of the current Canadian Flag.
When it was originally issued it sold for an astronomical $99.00 - and it sold out almost instantly.
I say astronomical because prior to this coin, most RCM proof silver dollars only fetched $35 when originally issued.  The attraction with the coin at the time? There were only 5,000 made.
It threw collectors into a frenzy. The lowest mintage proof silver dollar before 2005 clocked in at 10,000 coins.  And because of this low, low mintage, speculators went wild.
Even before it sold out at the Mint, it was selling on eBay for $150.
Once sold out it jumped rapidly to $200, then $250.
At the height of the craze, many sold for over $600 and some as high as $850. It commanded asking prices of $1,200 for a while.

Wow! $1,200 for a Canadian coin with a face value of $1.
So what does this awesome collectible sell for today?

Now-a-days you can pick it up for $250 quite easily on eBay. Hunt around and you can get it for less.
If you bought a bunch at $99, it's no big deal. You can still sell them and make a profit. You can even undercut most of the competition currently offering the coin at $250. Sell it for $150 and you still make a handsome profit.
Buy my collector friend says a great many people bought those coins at the $250 - $400 price point. They were caught up in the frenzy and many hoped they would be an 'investment' they could sell as the coins raced up in value.
Those who sold at the right time profited. Those who held too long have lost money.

Today there are still many who bought at $400 and are waiting for the market to come back.
I asked him on Sunday, "what is the coin actually worth?"
His answer, "whatever someone will pay you for it!"

A poignant comment.
Yesterday our friends over at the blog Vancouver Price Drop released their weekly top 20 price reductions of homes in the Lower Mainland.
Halfway down the list is 3856 W 8th Ave. in Vancouver. 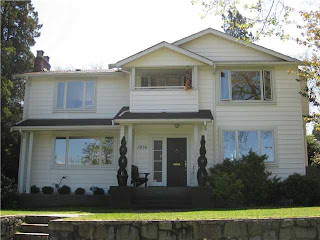 And it's exactly that psychology which is glazing buyer's eyes right now.

Of course some out there will suggest this is an example of realtor games (listing pulled, relisted below assessed value to produce a bidding war).

It's a trend we have been seeing in areas like Richmond for a while now, properties being listed below assessed value because inventory simply isn't moving.

But a house in Point Grey for $400,000 below assessed value? In HAM (Hot Asian Money) central?

Of course a year ago, Richmond was HAM central too.
So what's 3856 West 8th actually worth?
The answer, of course, is what someone will pay for it.

And with the stunning developments of last week, it probably won't sell above the current asking price.

Doubt it. But like the 2005 proof enamel dollar, I am supremely confident you will see this home trade hands in a few years time for a multiple of $80,000 that is far closer to that 1973 price than it will be to $2 million asking price of 2012.

We'll keep an eye on on what it sells for in the immediate future to gauge just how much the landscape is actually changing.

Speaking of Richmond, check back later this afternoon as we introduce you to an Asian Richmond realtor who has a very blunt message to high end homeowners in the dyked city who wish to sell:


"If you have to sell you will have to resort to much deeper price cuts to make a sale!"