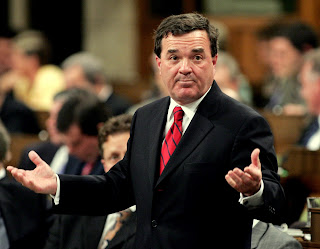 Speculation is racing around the real estate community that Federal Finance Minister Jim Flaherty is about the axe the 30 year mortgage in Canada.
About an hour ago (at 5:19 PDT), Reuters made the following announcement:

Flaherty news conference at 8:15 a.m. (1215 GMT)
* Canada economy strong but faces big risks
(Reuters) - Canadian Finance Minister Jim Flaherty will make an announcement on Thursday at 8:15 a.m. (1215 GMT), the Department of Finance said on Wednesday evening without providing any details.
Flaherty will hold a news conference in Ottawa at that time, according to the brief statement.
Officials at the Finance Ministry did not immediately reply to requests for additional information and officials at Prime Minister Stephen Harper's office declined to comment.
Flaherty, who has been finance minister since 2006, faces a raft of domestic and international challenges to an economy that remained relatively healthy through the global financial crisis, including a strong housing market that some economists now fear is overheating.
He has just returned from Mexico where he accompanied Harper at a summit of the Group of 20 industrialized and developing nations, which focused on the European debt crisis.

A number of blogging sites are now speculating that Flaherty will end the 30 year amortization, bringing conditions full circle.
It was the increasing of the amortization from 25 years up to 30, then 35, then 40 years which many argue ignited the housing bubble.
We will see tomorrow.
==================

Please read disclaimer at bottom of blog.
Posted by Whisperer at 6:43 PM