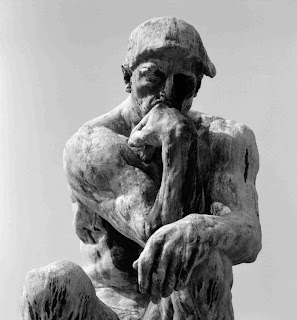 A few random items for you this morning.
(1) On the topic of HAM
The topic of Hot Asian Money (HAM) in Vancouver is a strong one. There have been lots of stories about how west side houses have been snapped up by HAM and sit vacant (the Courier newspaper did an article about this, but I don't have the link at the moment).
In a report released by the Bejing News, google translated here, Bejing alone has 3.8 million vacant houses, presumably bought by speculators in the real estate frenzy there and those homes are being held for the right time to 'flip'.
3.8 million?  Even in the United States, five years into a bursting housing bubble, it is estimated only 2.54 million homes are available for SALE!
Imagine the panic to dump if the China/world economy turns significantly downward?
(2) On the topic of Vancouver Speculators
Speaking of not ending well, a discussion went on the other day over in the comments section of the blog Vancouver Condo Info. Contributor 'Patsan' noticed that one person (Gary) was advertising 3 homes for rent on the west side of Vancouver and the tone of the craigslist ad seemed 'desperate'.
I noted that if the phone number listed was 'googled', there were a whole host of properties available for rent from this 'Gary' person. One diligent reader of the site did some research and noted:

"This Gary guy has at least 12 West Side and Richmond properties advertised for rent. They are all vacant and available now and if you goggle the address all were recently purchased. Most of the properties on the West Side sold for close to 3 million and the Richmond ones are in the 1.5 million range. The guy must be a rental agent or ring leader behind investors who have recently dropped at least 20 to 30 million on houses to rent. The ads all state minimum 1 year lease so they are not looking for quick flips. None of the ads have photos or much details. The guy doesn’t have any houses advertised that appear to have been previously rented so he must be a newby to the game."

And this is just ONE group of speculators in Vancouver.
Now multiply Gary's group by a couple of hundred and imagine the speculative panic here if the housing market in Vancouver turns downward.
(3) Comparing Statistics
Speaking of the euphoria that buyers were in a year ago, contributor VMD over on Vancouver Condo Info posted some comparisons of single family home sales from last May 2011 to this May 2012 to show just how bad sales are this year compared to last year.
1. Van West
Sales YoY -47%
Lists YoY +36%
2.West Van
Sales YoY -59%
Lists YoY +23%
3. Burnaby
Sales YoY -38%
Lists YoY +23%
4. Van East
Sales YoY -28%
Lists YoY +26%
5.Coquitlam
Sales YoY -21%
Lists YoY +21%
6. Richmond
Sales YoY -20%
Lists YoY +11%
VMD notes Richmond was the first to slow down last spring, so its numbers were pretty bad last May. This May is even worse.

Will Boomers pull the trigger in greater numbers as the market worsens and slash the price point they will accept even more? Thus pushing the drop from 12% to 20%?

Could the drop accelerate even greater than that?
(4) If we slide downward, how far could we go?
If you follow this blog, you already know my thoughts.
Consider this musing from Vancouver realtor Larry Yatkowsky who broaches the concept of a 32% drop in prices:

Let’s start at the highest average price ever reached in Vancouver for a detached home – a mere $1,235,244. Now let’s also assume this market is on the skids sliding down the drain faster than we think to bottom out at something most of us would not imagine – a market that drops so much it hits May 2009′s Average Price of $831,171.
With a price drop of $404,073... that's a 32% drop from the all time high.

Consider that a 32% drop in prices only takes us back to 2009.
Larry argues buyers will rush in at this point (and I agree), but rather than establish a bottom for the 'correction' - I can't help but recall the 'phases of a bubble' chart: 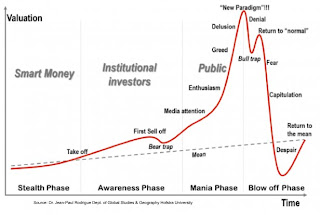 A rush of buyers into the market at this point would just about reflect these phases perfectly, wouldn't it?
Can you see all the pieces falling into place for a significant drop?

Please read disclaimer at bottom of blog.
Posted by Whisperer at 10:42 AM