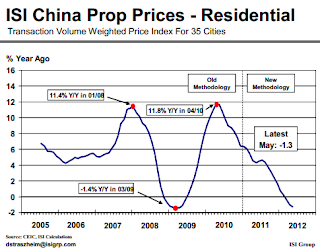 Perhaps one of the most important stories for our little hamlet on the wet coast is the fact that China's property values continue to decline.
The chart above from ISI Research shows that the rate of decline is now similar to the lows in early 2009. And, as Pragmatic Capitalism notes, data from ISI tends to be more accurate than the official numbers coming out of China’s housing ministry.
As we have noted in earlier posts, much of this decline has been engineered by Beijing as China attempts to arrest their housing bubble.
And as Reuters notes, this policy will not be letting up soon. As an unnamed spokesman from the housing ministry was quoted as saying that “all localities must firmly implement various property tightening measures as required by the central government.”
Beijing is sending a stern message to local authorities to keep the measures place.
But, as China undergoes an economic slowdown, which may end up being more severe than the authorities had anticipated, will the tightening measures in the housing market be relaxed (particularly at the local level)?
Reuters notes that even if measures are relaxed, any rebound may be a ways off.
Vanke, China’s largest developer by sales, said earlier this month it would take about 11 months to sell down unsold stocks in key cities such as Beijing, Shanghai and Shenzhen should the market rebound.
Hui Jianqiang, head of research at the China Real Estate Association, told Reuters that he doesn't see a rebounding market.

“I’m not worried about a home price rebound as long as the government keeps its tightening stance.”

Please read disclaimer at bottom of blog.
Posted by Whisperer at 7:00 AM