The Bank of Canada repeats its warning to you: Curb your enthusiasm for debt! 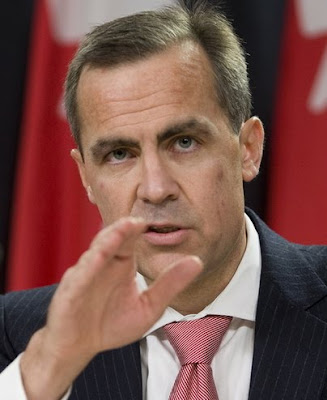 You will recall the other day that I commented on the fact that the finances of most Canadian households are in abysmal shape.

It is one of the key factors that will contribute to Vancouver's status as ground zero in a monumental housing collapse.

Last Friday I said that numerous economic reports have cited that debt is out of control in this country. Canadians have saddled themselves with record mortgage debt as household liabilities are now equal to 145% of earned income. Six in ten Canadians now live paycheque to paycheque. 40% are not even trying to save money anymore because there is no money left over after daily expenses.

As faithful readers know, my number one recommendation over the past two years has been that, if you are in debt, get out of it... now!

And today Mark Carney, the Governor of the Bank of Canada - and the man who plays a large role in influencing interest rates, issued yet another warning to Canadians on just this subject.

Using particularly strong language (for the head of a Central Bank), Carney warned Canadians today to curb their enthusiasm for debt. In a midday speech to the Windsor-Essex Regional Chamber of Commerce, Carney echoed my warning about the perils of the fact that the ratio of household debt to disposable income hit 146% in the first quarter of the year, a record and a level that is closing in on that of the U.S.

"This cannot continue," the central bank chief warned, adding that while the net worth of Canadians is about six times the level of average disposable income, asset prices rise and fall but "debt endures."

Carney can see what I see.

We're in a tenuous position. Real Estate doesn't always go up. And many believe real estate is set to go down. How much it will go down depends on your particular slant. And as many of you know, my slant is 50 - 70%, minimum. And I lean heavily to the 70% minimum end.

Any kind of decline in asset prices will amplify and exacerbate this precarious Canadian debt position.

This focus on plunging all our eggs into home mortgages is important. With more and more of our disposable income going to monthly mortgage payments, Carney observed that household balance sheets are growing "increasingly stretched."

But what about our economy? Isn't it growing? Aren't we out of the recession with everything getting better and our paycheques growing?

Carney noted that while Canada’s recovery has been the envy of the Group of 7, but that recovery has relied on levels of consumer spending and investment in housing that are proving unsustainable.

Translation: The economy has relied on the fact we have been borrowing our asses off and plunging ourselves into record debt - courtesy of Carney's emergency level, record low, interest rates.

Carney's warning was simple and straightforward and he reduced it to 3 simple words:

You would be wise to take heed, if you haven't already.

Please read disclaimer at bottom of blog.
Posted by Whisperer at 5:24 PM