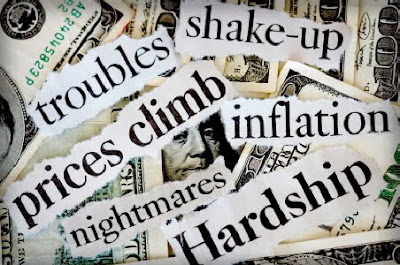 I had a post yesterday regarding local real estate for you, but I have set it aside for now.

A couple of weeks ago, on August 24th, I made a post (which you can read here) on a theoretical framework for the arrival of hyperinflation. It was reprinted from the blog of Gonzalo Lira and Lira's thread went viral on the internet.

One of the reasons it garnered so much attention is because the issue cuts to the biggest and most confounding debate that's going on right now in all of finance: what will the final outcome of the Fed's market manipulative actions be?

Will the end result be deflation, inflation or hyperinflation (which is a distinctly different phenomenon from either of deflation or inflation).

Lira's post infuriated some hard core deflationists who continue to refuse to acknowledge the possibility that in its attempt to inspire inflation at all costs, the Fed may just push things beyond the tipping point of monetary imprudence.

Recently Mish Shedlock came out with a rebuttal to Lira in a podcast on Global Edge with Eric Townsend and Michael Hampton. In the podcast, Shedlock's conclusion was that Hyperinflation is the endgame, "so it is unlikely."

Mish followed this up with a post on his blog.

Yesterday Lira responded saying that Shedlock had turned the issue into a personal attack and that Mish had taken many of his points out of context (you can see a portion of Lira's response in yesterday's comments section). Lira has proposed an open debate with Mish on the topic. We will see if Mish accepts.

I bring all of this up because it triggered a comment in yesterday's comments section AND a whole whack of emails to my inbox.

As I said at the start of this post, this topic is THE biggest and most confounding debate that's going on right now in all of finance.

With that in mind I note that John Williams has come out with another bold statement today.

John Williams runs a website (www.shadowstats.com) on which he provides a stunning amount of real, unmanipulated government data.

His website, Shadow Stats, often paints a dramatically different picture of the state of the economy from the spin offered by government. Williams will, for example, offer you statistics on the Consumer Price Index as it existed prior to 2000. That was the year the formula for calculating inflation was changed. If you were to calculate inflation today using the same formula used before 2000, the rate is in excess of 6%!

Considering we are now force-fed statistics that pacify the masses by stating there is not inflation, that is significant.

Of course it's because the government has changed the way that figure is now calculated so - voila! - there is no inflation (even though you are feeling it in your pocketbook).

John Williams is yet another economist who has stated his firm believe that hyperinflation is in the offing. In 2009 he put out this analysis.

And today he has just released a note to clients in which he warns that hyperinflation may hit as soon as 6 to 9 months from today.

With so many established economists and pundits seeing nothing but deflation as far as the eye can see, and the US Federal Reserve doing all in its power to halt the deleveraging cycle, both in the open and shadow economies, what is Williams' argument?

Here, if you interested, is the statement from John Williams. I personally think it is important to read the likes of Lira, Shedlock and Williams to try and understand this important debate and make up your own mind on this critical economic issue.

Excerpts from statement from John Williams of the blog Shadow Stats

What does this mean for US financial markets?

If the Lira/Shedlock debate comes together, I'll let you know.

Please read disclaimer at bottom of blog.
Posted by Whisperer at 9:44 AM

Email ThisBlogThis!Share to TwitterShare to FacebookShare to Pinterest
Labels: Hyper-inflation