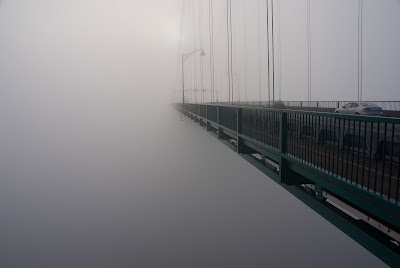 Depression seems to be the order of the weekend in the Village on the Edge of the Rainforest.

On three separate occasions this weekend, bridges into the downtown core of the city were shut down because of potential jumpers. Was it the return of the ever incessant fall/winter/spring rains? Or are homeowners finally beginning to grasp what is happening in real estate?

Mainstream media has been all abuzz recently, finally discussing the possible existence of a Canadian housing bubble. Three consecutive months of dramatically dropping sales will do that. And with September shaping up to be a fourth consecutive month (with September sales currently on target to be 45% below this time last year), we watched the R/E spin doctors adopt an interesting tact to rationalize last months dismal figures.

Each month all year long the CREA and the BCREA have been comparing data with the same month from the previous year, an approach that hasn't been pretty particularly since 2009 (with it's stimulus induced sales) set many sales records.

How to deal with all this negative press? Change the way you look at the statistics, of course!

As a result this month's 'analysis' of the sales data had a curious twist. Rather than compare data with last year (which would suggest sales were down 40% from the same time last year), the R/E associations reported that August sales were up 4.1% on a seasonally adjusted basis from July (which had been a really bad month for home sales because of the effects of the harmonized sales tax implementation in Ontario and British Columbia).

But the fun doesn't end there. On the newscasts this week came this gushing report that this 'rebound' could mean the buyer's market is ending and insinuations that you best snap something up right now... before it's too late.

Maybe that's why there were so many bridge jumpers this weekend, young buyers got sucked into this malarky and are regretting it already. 'Helllloooooo' down there.

Spin aside, months of inventory is double what it was last year and with the exception of 2008, the last four months of sales have been the lowest in 15 years in both Greater Vancouver and the Fraser Valley.

And to the chagrin of the BCREA/CREA, national media picked up on this Financial Post story which dismissed their manipulative claims of an increase in August and headlined that this 'rebound' won't last long.

Don Lawby, chief executive of Century 21 Canada, confirmed the gloomy fall outlook the spin meisters are attempting to counter saying, "I don't think it's going to be a great fall market. But to what degree [it falls], I don't know yet. It sure isn't going to compare with last fall. It's going to be down."

Desperate State of Affairs Outside the Lower Mainland

Early this morning a work colleague and I hooked up for coffee and he was stunned to watch yesterday's clip on a 75% collapse in sales in Victoria.

The fact of the matter is the general public is only just now beginning to grasp what is going on in the market.

He was equally surprised to hear about what is going on in the Okanagan. As this beginning of the month Globe and Mail article outlines, real estate in the Okanagan has hit incredible hard times as the collapsing economy has lead to an evaporation of buyers.

“We are definitely beating the market, and it’s because of financial stability,” says Howard Kruschke, senior director of sales at Kelowna's Predator Ridge. “It’s changed dramatically over the last couple of years – the consumer wants to know where the money is coming from. The consumer doesn’t want the risk of, ‘we’re going to do that in the future.’ They’re not willing to take that leap anymore.”

Developers throughout the region are routinely offering slashed prices and incentives right now that range from free accommodation on open house weekends to zero mortgage payments for a year.

Vancouver developer Rob Chetner entered the recreational property market at its peak, with an ultra high-end 20-home Kelowna waterfront complex complete with private dock, private beach, geothermal heating, outdoor kitchens, and heated salt water pool. A couple of years ago, presales for the Waterfront sold from $1.7-million to $2.2-million. But by the completion date of summer 2009, the market had tanked and all but one presale deal fell through.

Last Saturday I made a post about realtor Greg Andruff who had used his new blog to dismiss the concept of a housing bubble in the Vancouver market.

Among the items in the email inbasket this week was a classy response from Mr. Andruff to that post:

Hmmm... don't allow yourself to become fodder for the blogosphere?

Since he asked, I suggested two things.

First I told him I personally admire realtor's like Larry Yatkowsky who use their blog to both inform and promote their community. Larry attempts to provide information for clients (and potential clients) that doesn't always follow the 'spin' on the current market put forward by CREA or BCREA. This engenders a significant amount of respect which tends to translate into a perception of 'trust' which augers well for his longterm business.

The second point I suggested was that the direction of real estate in the coming months/years was a topic of great interest for a great many people. Since he's started off by offering his opinion on that direction (with his 'myth of a housing bubble' post), I encouraged him to follow up by offering his rationalizations for where he believes that direction will be taking us.

I'll keep you posted on any updates he may offer.

Please read disclaimer at bottom of blog.
Posted by Whisperer at 7:27 PM