We will pay you to take out a mortgage! 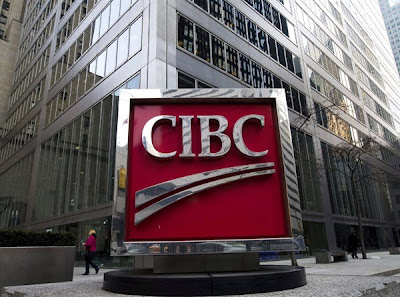 You could actually buy a house with nothing down and get money back from the bank when you bought... in essence you could get paid to buy a house.

One of the items making the rounds in the Canadian blogoshpere today is this article in the Globe and Mail which notes that Canadian banks are struggling to boost loans as demand ebbs in the weak economic rebound.

Well I've got news for Mr. Nixon. Canadian banks are doing stupid things as he says this.

In the comments section from yesterday's post comes this link from Rob to an offer from CIBC.

And since your 5% downpayment is only $25,000, you can basically buy the home with nothing down and get PAID $10,000 for making the purchase.

Good thing our conservative banks aren't making the same mistakes the Americans did. Again I ask, is it so hard to see what is coming?

Meanwhile I am watching with keen interest as a colleague attempts to sell his one bedroom condo.

He bought the condo several years ago for %54,000 and has moved his girlfriend's house. As a result, the condo has been listed for sale.

After consulting with his realtor, the property was listed for $144,000 - right in the middle of the price range for what comparable apartments were selling for.

So I asked him, "if you get a low ball offer, what would you accept?"

Now that's a measly 3.5%, but perhaps that sums up the current mindset of sellers right now. Despite having paid only $54,000 a few years ago, he firmly believes his property is worth almost three times what he paid. And he isn't prepared to move on the price... because 'that's what it's worth'.

Of course... that was three weeks ago.

After receiving the sum total of ZERO hits on the MLS listing, his realtor recommended adjusting the asking price.

This week it was dropped to $139,000. No comment on if he's adjusting the amount at which he is willing to accept.

I'll keep you updated on how things go.

Please read disclaimer at bottom of blog.
Posted by Whisperer at 8:14 PM