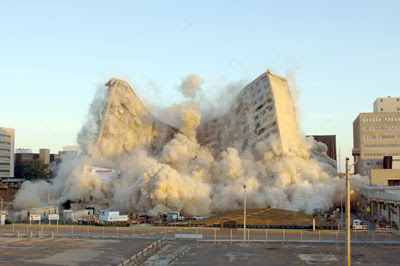 Yesterday I made a post about former US Federal Reserve Chairman Alan Greenspan's speech to the Council on Foreign Relations in New York.

Greenspan made some interesting comments about Gold, but that wasn't the only point of interest.

Of particular note for real estate observers in the Village on the Edge of the Rainforest, were comments made about government stimulus.

The still influential Greenspan said fiscal stimulus efforts have fallen far short of expectations, and the government now needs to get out of the way and allow businesses and markets to power the recovery.

“We have to find a way to simmer down the extent of activism that is going on” with government stimulus spending “and allow the economy to heal” itself.

At this point, “we’d probably be better off doing less than more” because “you’d be far better off to allow the normal market forces to operate here," Greenspan said. That’s largely because stimulus spending is not proving as effective as many had hoped. “To the extent the evidence suggests very large deficits concurrently crowd out capital investment, there is a debit to the stimulus program that is somewhere between a third and a half of what the gross stimulus is,” he said.

Greenspan said that the U.S. needs to do something now to deal with budget deficits and it must do something very soon. He explained his anxiety is so high that “I’m coming out in the first time in my memory” in support of higher taxes in addition to reduced spending, including allowing the so-called Bush tax cuts to expire.

“Our choice is not between good and bad; it’s between terrible and worse,” Greenspan said. The nation has “a level of commitment... which I don’t think we can psychically meet,” absent huge changes in how the government finances itself.

These are, once again, stunning statements with potentially massive reprecussions for Vancouver.

The ONLY reason interest rates are so low is because of government intervention.

Given the current state of the worldwide economy and the capital demands of governments, if interest rates were let to float to market level the impact would be profound.

Rates would, at the very least, return to their historical norm over the last twenty years of 8.25%. Government has been manipulating those rates for the last 10 years and the time for that intervention is coming to an end.

When this all plays out, Vancouver real estate is going to implode on a level even the staunchest of bears cannot fathom.

Vancouver has had three consecutive months of dismal real estate sales and September is shaping up to make it four in a row with sales down about 40% from last year.

But that's nothing compared to Victoria where September is on track for a collapse in sales of 75%.

And finally, from the Hyperinflation Debate

Harry Schultz, author of the famous International Harry Schultz Letter [IHSL], has had a long and colourful financial career.

Much like Gonzalo Lira, he is fascinated by the possibility that hyperinflation might be triggered quickly, by a sort of global financial traffic accident. Back on June 10th, 2010 he wrote:

At age 89, Schultz is winding up his businesses and will wind up his IHSL at the end of this year. In the latest letter he summarizing the account of how hyperinflation could happen by Gonzalo Lira and describes Lira's scenario as “a genuine risk” and comments: