How can we be so blind? 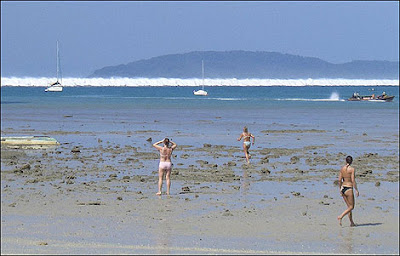 Yesterday I mentioned that I had an encounter with James, a casual acquaintance of mine who happens to be Scottish (he's a tolerable guy though, so we overlook that).

I've known James for almost 20 years, but yesterday was the first time we had ever talked about real estate... and it was an intense 15 minute conversation in which he hit on just about every stereotypical defense for real estate.

It was almost a surreal encounter.

But it speaks volumes.

Mainstream Canada is still completely unaware. They have bought into the 'official' line that everything is alright.

And perhaps it is just as well. Can you imagine the panic to dump real estate were it any different?

They are completely unaware about how our Canadian banks barely escaped their own meltdown in 2008.

Few realize all five Canadian banks are levered at an average of 31:1 and that if tangible assets were to drop by 3% in value, tangible common equity would effectively be wiped out.

Nor do many realize that Canadian Banks were bailed out by receiving $65 billion in liquidity injections from the Insured Mortgage Purchase Program (IMPP) in 2008 - Canada's version of TARP - whereby the CMHC purchased insured mortgages from Canadian banks to provide additional liquidity on the asset side of their balance sheets.

No one seems to be aware that the Bank of Canada then gave our Canadian Banks an additional $45 billion in temporary liquidity facilities or that the Canada Pension Plan, through the purchase of $4 billion in mortgages prior to the IMPP program, raised the total government bailout to $114 billion.

And what about the CMHC being ordered by the Federal Government to approve as many high risk borrowers as possible to prop up the housing market (with entry level buyers) and keep credit flowing?

Last year the Conservative Government, after our nation spent 10 years digging ourselves out of a $45 Billion deficit with onerous taxes like the GST and years of cutbacks in government services, replunged us back into hock with a record breaking $50 Billion deficit.

If CMHC is forced to pay out on a mere 10% of that guaranteed $776 Billion, that amount would more that double that historic $50 Billion debt.

But the average Canadian is completely oblivious.

They sincerely believe that our secure, non-bailed out Canadian banks don't lend to 'risky borrowers'.

They are wilfully blinded to the ads all around them whereby someone with no money can go out and, courtesy of bank initiatives like this one that offers them 7% back, can get their 5% downpayment covered and actually get PAID 2% of the mortgage value to make that purchase.

Nothing down and get PAID to buy a house!!!

We tell ourselves we aren't making the same mistakes the Americans did. And we do it with blatant ignorance.

But Americans can see it.

When I spoke to two tourists from Minnesota in August, they asked what the interest rate was on a 30 year mortgage here. When they found out virtually no Canadians have long term mortgages... that the vast majority have 5 year terms or less that reset at whatever the going interest rate is... they recoiled in shock. They instantly recognizing that all Canadian mortgages are set up exactly like American subprime mortgages: 2-5 year low teaser rates that reset higher once the teaser term is over.

But the average Canadian is oblivious.

We bailed out our Banks.

We allow people with no money to buy houses (which has driven up the price of our real estate exponentially).

We have a vastly higher percentage of Canadians juiced on teaser rate mortgages, mortgages they can afford now but for which the vast majority will not be able to afford when rates reset higher.

And when interest rates do climb higher, our real estate market will implode just as spectacularly as California, Phoenix or Florida.

That collapse has already started. As I have shown you in posts this month
We are like the people in South East Asia who, on Boxing Day 2004, witnessed the sea drain from their shores.

Not sensing the danger, they ventured out to check out the tidal flats in wide-eyed wonderment only to realize, too late, the danger as they tried to flee for their lives from the crushing Tsunami barreling down on them.

The only difference is that the South East Asians didn't witness a neighbour go through the same situation 3 years earlier and then make the same mistakes.

Canadians saw the Housing Tsunami strike America, the UK and Europe. We have no excuse for not seeing this coming.

Yesterday my friend James revelled in calling me a doomer.

I perfer the term 'rational realist', myself.

==================
Email: village_whisperer@live.ca
Click 'comments' below to contribute to this post.
Please read disclaimer at bottom of blog.