One of the tales of malarky you hear by those rationalizing that the economy is turning around, it that the US consumer is bearing down and paying down debt. This, the argument goes, augers well for the return of balance.

Well, not so fast.

As the Wall Street Journal notes, this isn't what is actually happening at all. The reality is that over the past two years, US consumers have not been deleveraging as a voluntary act of eliminating debt, but have been actually aggressively leveraging more and more until the bank providing them credit puts them into involuntary bankruptcy, cutting off the money flow.

This is a startling realization.

What it means is that the average American is actually hyperleveraging to the point where all available credit is forcefully eliminated by a lender institution in one fell swoop!

The data outlined by the WSJ confirms that of the over $600 billion in deleveraging that has occurred, only $20 billion or so of it was voluntary. Irresponsible borrowing practices, in which US consumers spend, spend, spend themselves into oblivion, accounts for the balance.

Consumers aren't changing their habits at all. They are continuing to binge only to be cut off cold turkey.

Instead of entering a slow deleveraging rehabilitation, something far more insidious is going on.

Consumers are accelerating spending until the charge off threshold at the lender is breached, and all credit is cut off, which results in a collapse of a creditor's FICO score, cutting him or her off completely from future (at least near term) credit access.

What this means for consumption is that we are building to an abrupt collapse of the consumer economy whereby a massive number of consumers will be saying goodbye to credit for a very long time.

With American unemployment still at record highs, and soon to take another leg higher, with paychecks continuing to decline, with excess capacity at record highs, with unemployment claims reaching their ceiling 2 year anniversary from the Lehman collapse, and with the general economy double dipping; the implications of this will be dire, as there will be no gradual decline.

Instead we are staring at a looming abrupt collapse.

The implications here for the economy, and the stock market, are profound.

On the slow melt front, faithful reader, R.D., has been keeping tabs on 2699 Cambridge Street, MLS V850651 which is located just west of the PNE in Vancouver's eastside neighbourhood of Hastings/Sunrise. 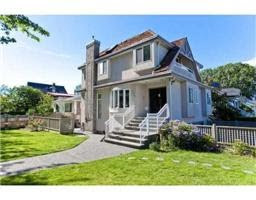 You've got to love optomism, don't you?

But rather than flip for a profit, it appears the buyer is headed to flip for a dip - a dip in equity.

The asking price was first reduced to $859,000 which means the buyer would be only breaking even after realtor fees, transfer fees and any lost/paid out interest - not to mention what could have been gained by investing elsewhere.

Seems even some Bears don't fully appreciate what's about to happen.

What about you? Are there any properties you have been watching that have been dropping their asking price? If yes, drop me an email and tell me about it.