All you need to know about money printing 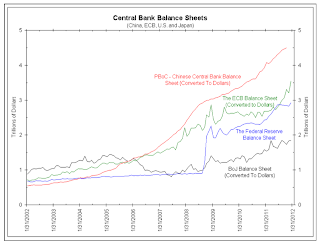 A few days ago there was another significant round of currency debasement.  Quantitative Easing (QE) is  taking place on a massive scale despite the fact you are not hearing about it in the mainstream press.
If the basic definition of quantitative easing (QE) is a significant increase in a central bank's balance sheet via increasing banking reserves, then all eight of these central banks [the others include the Bank of England, the Swiss National Bank, the Banque de France and Germany's Bundesbank] are engaged in QE (see graph above -click to enlarge).
What's particularly shocking about the data is that while every major central bank is busily printing money like it's going out of fashion – which it is – one of the biggest culprits is the one most widely associated with sound monetary policy, namely the Bundesbank, which has been one of the biggest inflationists of all: 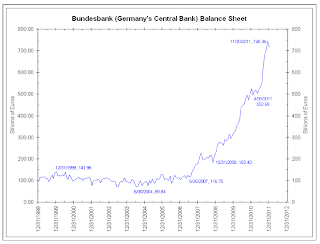 Please read disclaimer at bottom of blog.
Posted by Whisperer at 9:01 PM