Wed Post#2: Wild day for Gold, Silver and revelations in US Treasury's 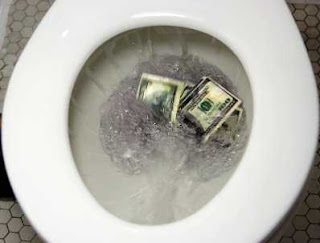 So after wild gains yesterday - particularly in Silver), both Silver and Gold plunged dramatically today. Silver was down over $2 per ounce while Gold dropped over $100 intraday.
Algo driven liquidations followed Ben Bernanke's testimony before congress as he implied that QE3 is off for now. As the cascading price triggered the $1700 sell limits, Gold fell all the way to $1685 then reversed back over $1700.
The fundamental elements driving Gold/Silver remain the same and I note that even more dats is coming out confirming China's move away from the US Dollar.
Today the US Treasury department released its adjustment to foreign purchases of US Treasury bond holdings.  This bi-annual exercise updates the monthly reports.

China sold over $100 billion in Treasurys in December alone (bringing its total to $1152 billion,down 12% from its June total of $1307 billion.
This means the US will be forced to rely ever more on domestically funded purchases of USTs... which means Primary Dealers and the Federal Reserve.
The biggest surprise from the data is that, contrary to previous speculation, Russia has not been dumping its Treasurys.
In fact the country's holding of $150 billion are the same as they were back in June, and over $60 billion more compared to the pre-revised number.
The key element here is that unless the US finds substitute demand for it's Treasurys, the only remaining buyer will be the entity that already has the largest holding of US paper - the US Federal Reserve.
The American's are monetizing their debt.
How much longer before other nations start to follow China's lead?
==================

Please read disclaimer at bottom of blog.
Posted by Whisperer at 5:25 PM

Email ThisBlogThis!Share to TwitterShare to FacebookShare to Pinterest
Labels: China on US Treasuries, Monetizing the US Debt, US Treasuries