Point Roberts: a few minutes drive by car... a world away in Real Estate 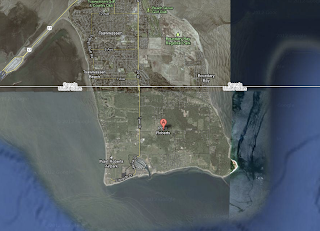 Nothing holds a mirror up to the insane housing bubble in the Greater Vancouver area like the isolated 1200-hectare U.S. peninsula community of Point Roberts, Washington.
The small little enclave of U.S. land is only accessible by crossing the regular US/Canada border, travelling across the southern portion of the Lower Mainland of Vancouver, and then accessing the peninsula which is located directly south of Tsawwassen, a suburb community of Vancouver. On a good day it's a 20 minute commute from the city limits of Vancouver proper.

Point Roberts is a community of about 1,300 people. It owes its existence to the 1846 Oregon Treaty, which divided the Pacific Northwest along the 49th parallel.

But drawing the border in such an arbitrary manner unwittingly sealed off Point Roberts from the rest of the United States.
After the Treaty was signed, British colonial authorities offered a more accessible plot of territory in exchange for the stranded peninsula, but the offer was stubbornly ignored by American officials.
So Point Roberts exists as a small 1200 hectare Island of America located within the natural geographic confines of British Columbia's Lower Mainland.
And while it is 'officially' the United States, hectares upon hectares of Point Roberts are owned by Canadians who were looking for cheap vacation homes in the shadow of Vancouver.
Why cheap?

Because despite being in the shadow of the largest housing bubble in North America, Point Roberts is no where near as bubblicious as real estate located 2 minutes north of the border.
As the National Post noted today, a recent listing on a Point Roberts Real Estate website lists a three-bedroom country home perched on a full acre for only $800,000.
In Tsawwassen, $800,000 only buys you an empty quarter-acre lot.
In Vancouver proper, it barely buys a two-bedroom condo on the fringes of downtown.
It is the most glaring reality check for Vancouver's insane housing bubble.
While Vancouverites have watched their city became one of the most expensive places to own a home in North America, Point Roberts land prices have dropped about 30 to 40% since 2008
As local Point Roberts real estate agent Jim Julius noted to the National Post, “there is a global recession going on, after all.”
You don't say? I wonder how much longer before those who live here fully understand this fact?
==================

Please read disclaimer at bottom of blog.
Posted by Whisperer at 5:45 PM