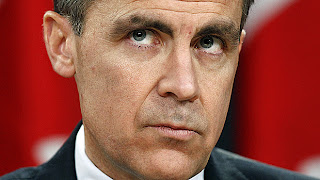 The Globe and Mail newspaper came out with an article today the encapsulates what many bear bloggers have complained about.
Primarily how Governor of Canada Mark Carney's debt warnings are at complete odds with the monetary policy he is following.
The Globe notes how Carney, for years now, has used ultra-low interest rates to flood the financial system with easy money.
That policy kept Canadians buying homes while markets elsewhere in the world faltered.
The conventional wisdom has been that keeping those emergency low interest rates in place has been a risk worth taking, given the weakness in the non-housing side of the economy.
But as it becomes clear that it's entirely possible that Canada’s housing crash wasn’t avoided, but merely postponed, the Globe wonders whether history will be kind to the Bank of Canada Governor?
Carney is being heralded around the world. He chairs the Financial Stability Board, tasked with reforming global financial institutions.
He’s whispered as a candidate to head the Bank of England.
Wherever he goes, people laud him for saving Canada from the worst of the global financial crisis. On Tuesday, the Canadian Club honours him as “Canadian of the Year.”
But this adulation, as the Globe notes, can quickly shift as it did for the former Chairman of the US Federal Reserve, Alan Greenspan.
When Greenspan retired from the U.S. Federal Reserve in 2006, he looked like a genius. He had steered the world’s largest economy through the dot-com bust, 9/11 and a recession. All was good as the economy roared.
But two years later, with the U.S. housing bubble bursting and the financial crisis raging, Greenspan’s reputation was substantially diminished. His failure to see the mortgage lending bubble – and do anything about it – is now etched in his legacy.
A rattled Mr. Greenspan later admitted his faith in the financial system was shaken.
If Canada’s housing market crashes, will Canadians look back on all his verbal warnings over the past few years about debt?
Or will he be judged on the monetary policy he kept in place as his warnings fell on deaf ears?
==================

Please read disclaimer at bottom of blog.
Posted by Whisperer at 7:23 PM