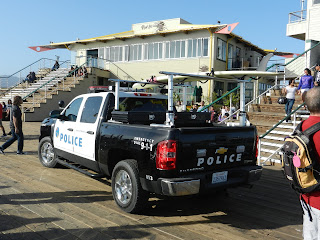 Does anything define the California stereotype quite like this Santa Monica police car outfitted with a surf board?
Spending time travelling down the Pacific Coast Highway in Southern California, it wasn't hard to leave the dreary rain of Vancouver behind.
And how could it not be so?

Temperatures in the high 20's, low 30's Celsius. Warm, sandy beaches. Cops who carry surf boards when they go to work... mmmm.
Even when you return to the spring type of day we had yesterday here at home, it's hard to think of the Village on the Edge of the Rainforest as the 'Best Place on Earth' (our provincial government's PR slogan the past few years) after having spent almost a week in the California sun.
Seems I am not alone as a Canadian with that sentiment... but I'll come back to that.
I couldn't help but notice that even in SoCal, there were constant reminders of the local real estate scene.
Helicopter's abounded where ever I went.  Your faithful scribe constantly looking skyward to see if any were yellow and carrying Cam Good with a load of eager Asian real estate buyers.
Why would I think this?
I was in California but one day when I opened the USA Today newspaper to an article telling me that HAM was everywhere in America and buying up real estate:

Buyers from mainland China and Hong Kong are snapping up luxury homes, often paying cash, in major U.S. cities such as New York, Los Angeles and San Francisco. They're coming by the dozens to buy foreclosed properties in downtrodden cities in Florida and Nevada. Chinese buyers are even starting to snap up pricey commercial buildings and hotels in Manhattan.

Yes... it's official. HAM has taken on the same spectre as the Japanese in the mid 1980's.
And even in California you can't escape articles that Asians with money are snapping up everything.

But an interesting tidbit leaped out at me. Seems denizens of the Land of the Red Dragon aren't the main source of Hot Money gorging on real estate in America.

In the U.S., the Chinese are now the second-largest foreign buyers of homes, behind Canadians, accounting for $7.4 billion of sales in the 12 months ended March 2011, up 24% from the previous 12 months, according to the National Association of Realtors.

Canadians are the largest foreign buyers of homes in the United States?

Hmmm...
Maybe Cam Good should consider flying Vancouverites down the California coast instead of Asians around B.C.?
But if Canadians are plowing themselves into record levels of debt, and they are doing this buying up real estate both at home and in America, it makes you wonder just how devastating things will be when the real estate bubble pops in earnest in our country.
When the crash comes,  it's not just going to be felt here in Canada.
==================