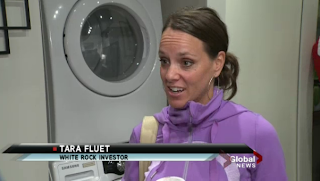 In our earlier post today we made note that our good old buddy, Cam Good, who was in the news promoting selling Condos in a fashion similar to the wildly successful Groupon coupons.
Cam gained notoriety last year when he hired a helicopter and flew supposed realtors from China around White Rock promoting condos he had for sale there. The suggestion was HAM was moving south to White Rock as well.
Turns out those realtors from China were actually Canadian realtors of asian descent from Vancouver.
Is Cam up to similar tricks again?
Did you note the interview with one of the prospective investors, Tara Fluet? That's a screenshot of her above from the Global TV interview.
Tara is identified as a ‘White Rock Investor.' What does she have to say about her experience?

To refresh your memory, here is the clip:
Interestingly if you a google search for Tara Fluet you get the following:

Apparently she's works as one of the realtor 'sales representatives' for Cam Good in the marketing of those very White Rock condos. (hat tip VREAA).
One of the commentors on the thread at VREAA said:

I phoned Global TV to complain about this and spent 10 minutes trying to point out why the lack of information about Ms. Fluet’s connection to Cam Good might mislead viewers into thinking her views as an “investor” were impartial.
The woman I spoke to at Global could not for the life of her understand what I was objecting to, even though I tried repeatedly to explain it. In fact, she grew indignant. She insisted that if Ms. Fluet is an investor, it was perfectly appropriate for her to comment even given her connections to Cam Good.

Faithful readers will recall that while discussing Marine Gateway, I mentioned that I had been told it is common practice to strike a deal with realtors that, if they want to be an exclusive agent to sell in a development, they had to pick up 5 to 10% of those options each. Once the development is finished, and all the developers suites are sold, then those realtors could sell the units they picked up to be a part of the sales team. It means that these exclusive agents could by buying up half of the pre-sales at an offering themselves.
As a sales representative for Cam Good's White Rock development, she probably had to pick up a few units herself.
Technically that makes her an 'investor' and, as far as Global TV is concerned, can be portrayed on their broadcast as an ordinary investor.
Riiight!
Real estate investor? Or real estate con artist?
You decide.
==================

Please read disclaimer at bottom of blog.
Posted by Whisperer at 11:02 AM