Tonight the Vancouver Canucks will play Game 4 of their first round NHL playoff series against the Los Angeles Kings.
Vancouver fans have viewed these playoffs as a chance at redemption for last year's disappointing loss in Game 7 of the Stanley Cup final.
Unfortunately after three consecutive losses, the Canucks (President Trophy winners as the best team in the regular season for the second consecutive season) are on the verge of elimination.
Rather than imbued with the spirit of the Canucks propaganda (see above video shown at Game 1 and 2 in Vancouver's Rogers Arena), most Canuck fans were severely disheartened after the team's loss on Sunday (the 100 Anniversary of the Titanic disaster).
That sinking feeling had Canucks fans redesigning the team logo... 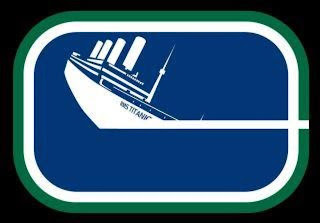 Please read disclaimer at bottom of blog.
Posted by Whisperer at 12:01 PM

Email ThisBlogThis!Share to TwitterShare to FacebookShare to Pinterest
Labels: Canucks