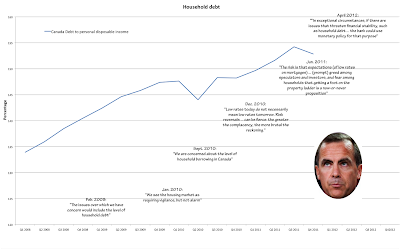 In the graph above, Macleans Magazine charts Canadian's debt-to-income ratios, alongside some increasingly alarmed quotes from BOC governor Mark Carney or other Bank officials.
Macleans notes that it has been years since Bank of Canada governor Mark Carney first started warning about Canadians piling on too much personal debt.

Rising household debt, after all, has been the most dangerous byproduct of his low interest rate policy, which was initially designed to help Canada sprint out of the Great Recession.

Right from the get-go, though, Canadians haven’t been listening.

As the situation has become more dire, so have the Bank’s warnings.

Today Canada’s ratio of household debt compared to disposable income is inching toward 160%, the peak seen in the U.S. and the U.K. just before their respective housing busts.

Macleans also notes that Carney is still sounding those warnings. Last week, he finally raised the prospect of raising interest rates, cutting people off from all that cheap money, even as the Fed down south sticks to near-zero rates.

Please read disclaimer at bottom of blog.
Posted by Whisperer at 11:55 PM