The Illusion of Housing as a "Great Investment" - Robert Shiller 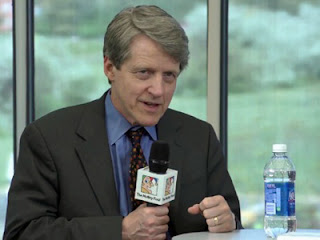 Still working on 'The China Trigger' topic I mentioned in the last post.
In the meantime, some interesting comments made by Yale professor Robert Shiller about real estate.
He says that historically home prices have not been a good financial investment - they essentially tracked the rate of inflation from 1890 to 1990.
But during the housing boom of the 2000s, the mind-set of most Americans (and Canadians) was that housing was a great capital-gains-generating investment.

Collectively we fell into that illusion and it created this spectacular bubble. We have to reflect now that we had a kind of crazy mind-set in the last couple of decades, and we have to get back to thinking like people used to think. Housing is a depreciating asset, goes out of style; it's going to end up in the wrong place. People will want to live somewhere else, so it's not any automatic capital gain.

And how did we fall into that illusion?

How did we get this idea that home prices only go up? There are a number of elements of it. I don't know where to start. One of them is that we had a lot of inflation. I'm talking psychology now. You're asking how we got into a wrong view. In the 70s and 80s, we had a lot of inflation and then Paul Volcker came in and stopped it. So inflation has been declining now for 30 years, and we've lived our lives in that environment.
But we still encounter examples when someone says, "My grandmother just sold her house." Especially five years ago, say this happened five years ago. Grandma sold their house for $300,000, and do you know what she paid for it in 1952? It was only $30,000 or something like that. So it went up ten-fold. Now those stories are in all of our repertory, but when you really look at it, what was just consumer price inflation over that period? It was something like that. She really didn't make any money off of it. And she was putting money into it year after year and maintaining it. So we forget that. It's that kind of bias.
Also I think that we're influenced not by population growth so much, but by the sense of the growing wealth of the world and the finiteness of land, and we mistake land for…well that's another thing that happened. We started to think of urban real estate as land. And that's a change in our thinking.
If you go back hundreds of years, there was land speculation in this country, but there was no housing, not much urban housing speculation. So it was common sense. Talk to George Washington, if you could, all right? George Washington was a land speculator, and he owned Mount Vernon as among his speculations. But for George Washington, speculating in real estate meant buying thousands of acres for a shilling an acre or something like that. Not buying a house in the city, so we've changed. It's become much more proliferated as something that everyone does. You buy this house and it's going to make you a lot of money.
It's also just the bubble itself -- the Fed had very loose policy and that encouraged the bubble and prices were going up fast, so that proliferated stories about real estate as an investment. Anyway, that's a complicated analysis of our psychology. But it is a unique phenomenon, really, that it was so national. And it also reflects our better communications now. It wasn't as easily so national in the past.

Please read disclaimer at bottom of blog.
Posted by Whisperer at 11:18 AM